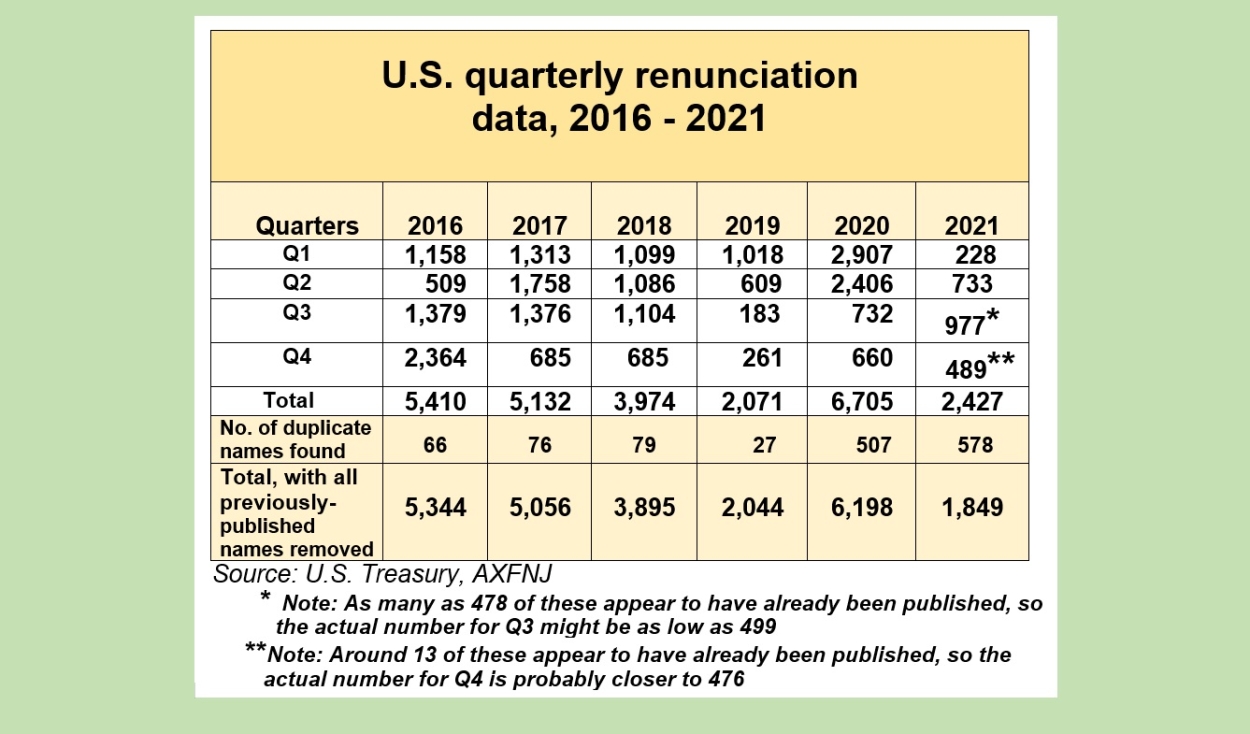 Just 1,849 Americans officially "expatriated" last year, according to the just-published quarterly list of names on the U.S. government's Federal Register website – the lowest number since 2012, as the Covid-19-related closure of most of the U.S. embassies and consulates around the world for the better part of the past two years seems at last to be taking its toll.

As the law currently stands, those wishing to formally give up their citizenship (but not their Green Cards) are required to appear in person before an official in a designated U.S. Loss of Nationality Services office, typically located in a U.S. consulate or embassy, in order for their renunciation/relinquishment application to be formally processed. Although some have reportedly begun to reopen, many remain closed.

Counting those whose names were on this latest list in addition to having appeared on previous ones, the 2021 total would have been 2,427, according to an expatriate data expert who assisted the American Expat Financial News Journal in compiling this report. (See table, above.)

The phenomenon of the re-publishing of the names of individuals who've formally renounced their citizenships within the last few years has emerged recently, according to this data expert, who has requested to be identified ony as being part of the AXFNJ editorial team, and is the latest twist on the quarterly Federal Register "doxing" list, which is already an unusual feature of U.S. data reporting.

That's because although the "Quarterly Publication of Individuals, Who Have Chosen To Expatriate," as the list is called, is informally used by renunciation industry participants and other observers as a source of numbers – as there isn't any other official source of the data – it was actually introduced during the administration of President Bill Clinton in the 1990s, when it was thought that the publishing of individual renunciants' names might discourage some from going through with the process, out of embarrassment.

(Some renunciants tend for this reason to refer to the process as "doxing," as this is a slang term that refers to having one's personal information revealed, typically in an online process.)

In November, the AXFNJ exclusively revealed that some 478 of the 977 names on the Federal Register's Q3 list had in fact appeared on earlier lists.

And continuing with the practice of checking the latest list of names against previous lists, as the table above shows, it seems that the actual number of those whose names are appearing for the first time on the 2021 Q4 list is just 476, rather than the 489 names that the list actually contains.

Meantime, it's been known for some time that many if not most of the names that appear on the Federal Register's quarterly lists are of individuals who formally expatriated, or handed back their Green Cards, in an earlier quarter than the one that just ended, and often, some renounced individuals have said, a year or more before.

In October of 2020, the Wall Street Journal quoted the IRS as saying that, "of the 2,907 names published in the Federal Register for the first quarter of 2020" – when many U.S. embassies and consulates would still have been open, as this was before the seriousness of the Covid-19 pandemic had been widely realized – "only three actually expatriated" in 2020.

The American Expat Financial News Journal has emailed the U.S. Treasury Department's press office to find out just why the Federal Register list often contains names of people that have appeared previously, and whether there are any plans to review the data, with the thought of potentially updating it if necessary. Thus far it has not received a response.

As reported, the total number of names published on the Federal Register's four quarterly expatriation lists in 2020 – 6,705, of which 507 had appeared previously –   was the most of any year since the government began publishing the lists. This was in spite of the fact that U.S. embassies and consulates around the world had been either closed or offering reduced services from around April 2020 onwards, owing to the Covid-19 pandemic, a fact thought to reflect a backlog of unpublished names that the government has been working its way through ever since the numbers of those actually receiving their Certificates of Loss of Nationality (CLNs) began to fall, as embassies and consulates around the world began to close, as the pandemic spread.

Numbers on these lists of names never went above 762 before the Foreign Account Tax Compliance Act was signed into law in 2010. Since then, the total has fallen below 1,000 only once, in 2012, when it was 932 – which was also the last time it ever below 2,000 names, until 2021, when, as noted above, it also fell below that amount once the 578 duplicate names were removed.

In examining the past six year's Federal Register data of expatriating individuals, not only is it apparent that a surprising number of the names had appeared on earlier lists, but that some of these names actually appeared not just once before, but  three or more times previously. 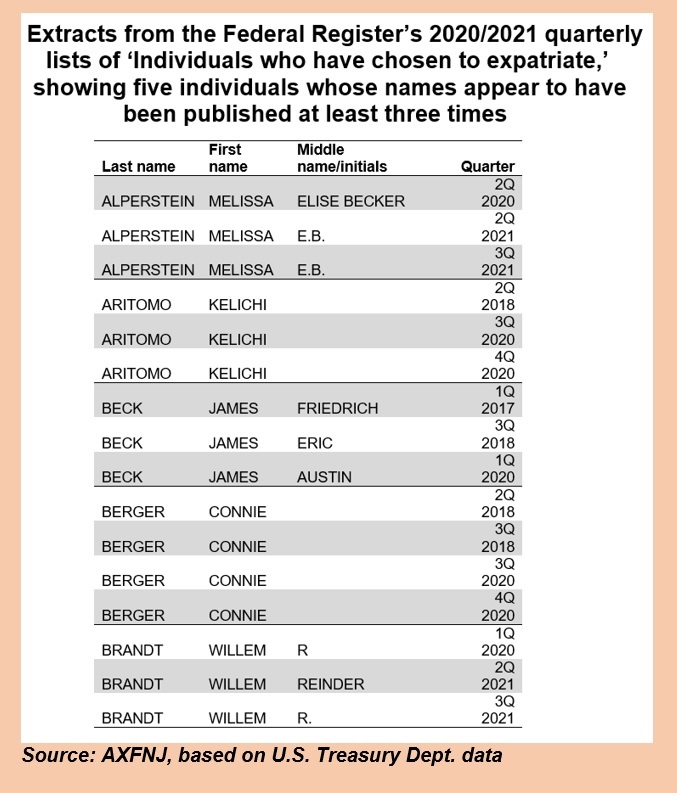 As the AXFNJ reported in November, around 40 people, in fact, from the 2020 and 2021 lists saw their names appear at least three times, the data shows. (See table, left, which shows the names of five individuals whose names have appeared at least three times so far.)

To see the latest listing of names on the Federal Register, click here.

As this and other publications have been reporting for some time now, the inability to let go of their U.S. citizenship for more than a year now has left many dual citizens around the world increasingly frustrated.

The Guardian newspaper and news website attracted global attention with its story last month on this topic, while Marie Sock, the only woman running for president in last year's election in Gambia, was disqualified from remaining in the contest last November after she wasn't able to give up her U.S. citizenship in spite of trying for more than a year, a story that also received widespread coverage at the time. On social media, meanwhile, individual expats rant about their own struggles, and about the cost of having to travel to other countries, where renunciation channels happen to be open, for the purposes of carrying out what some regard as little more than a clerical task.

"We have to travel to Frankfurt next week (1,000km and hotel stay) because these W****s at the U.S. Consulate don't answer ANY emails or telephone for the last 9 months," tweeted one (non-American) earlier this month.

Citizenship services offices starting
to reopen 'in some countries'

John Richardson, a Toronto-based lawyer who assists Americans in Canada and elsewhere with their renunciations, says that while it's true that some countries are still not accepting new applications to renounce, things are "definitely starting to move" in other places, including Canada. 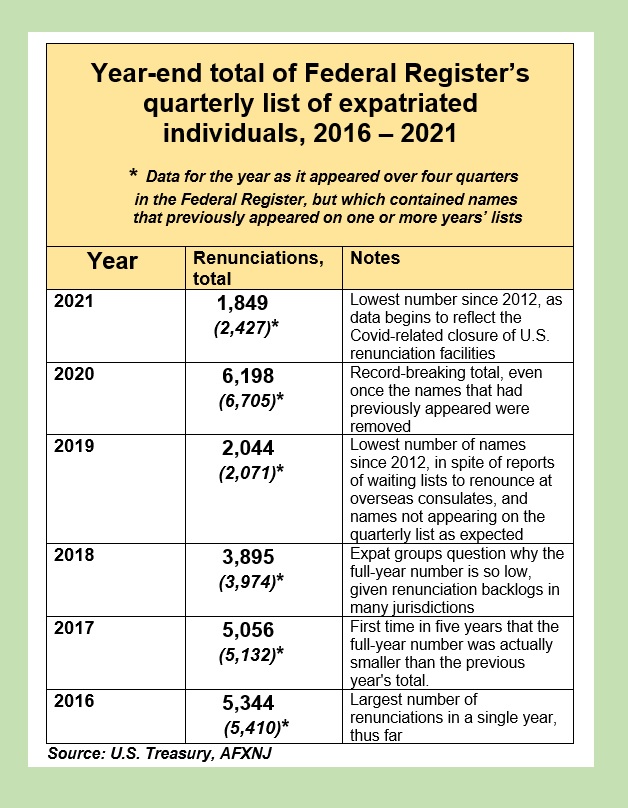 "I personally know people with appointments [to renounce] in all the available Loss of Nationality offices here –  Toronto, Ottawa, Montreal and Vancouver," he told the AXFNJ.

"In Asia, it depends on where people are; Australia is stop-and-go."

The Paris-based Association of Accidental Americans is currently in the process of challenging the State Department over what it says is the "unconstitutional" and "illegal" cost of renouncing (it was free for a long time, before the introduction of the Foreign Acount Tax Compliance Act was introduced, but it now stands at US$2,350), and the requirement that the task of renouncing take place in person at a designated U.S. Citizenship Services office.

Richardson said he supports the AAA's challenge, particularly with respect to the in-person appointments requirement.

Now that video conferencing has become so routine, he believes, there's no reason to insist on in-person appointments, unless the intention is to make renouncing more difficult.

The numbers of foreign-born individuals who have been formally "naturalized" as American citizens has also been hit by the closure of the U.S. government offices that handle such services, according to data posted online by the U.S. Citizenship & Immigration Services.

While the government doesn't formally publish the numbers of renunciations annually, beyond the quarterly list of names in the Federal Register, which leave the matter of counting up to those who seek out these lists, it does provide quite extensive information on those who become U.S. citizens, including a breakdown of where they're coming from, where they're settling in the U.S., and such other information as their ages, gender and marital status. (See table below.) 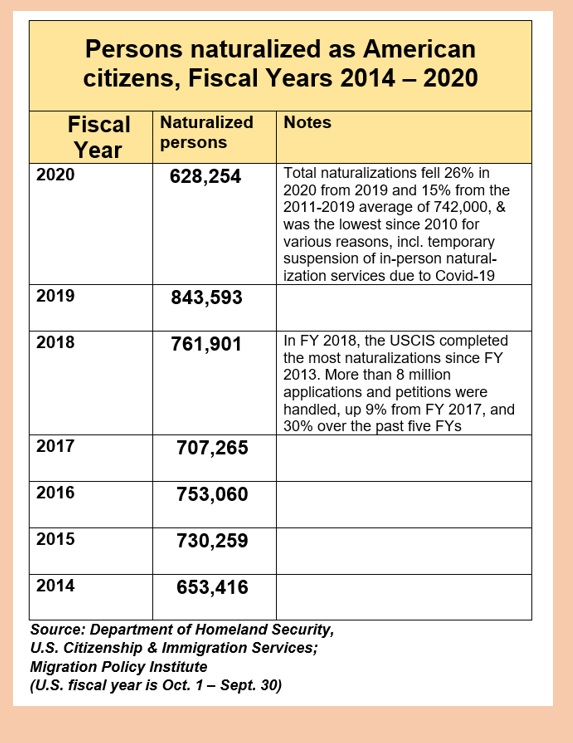