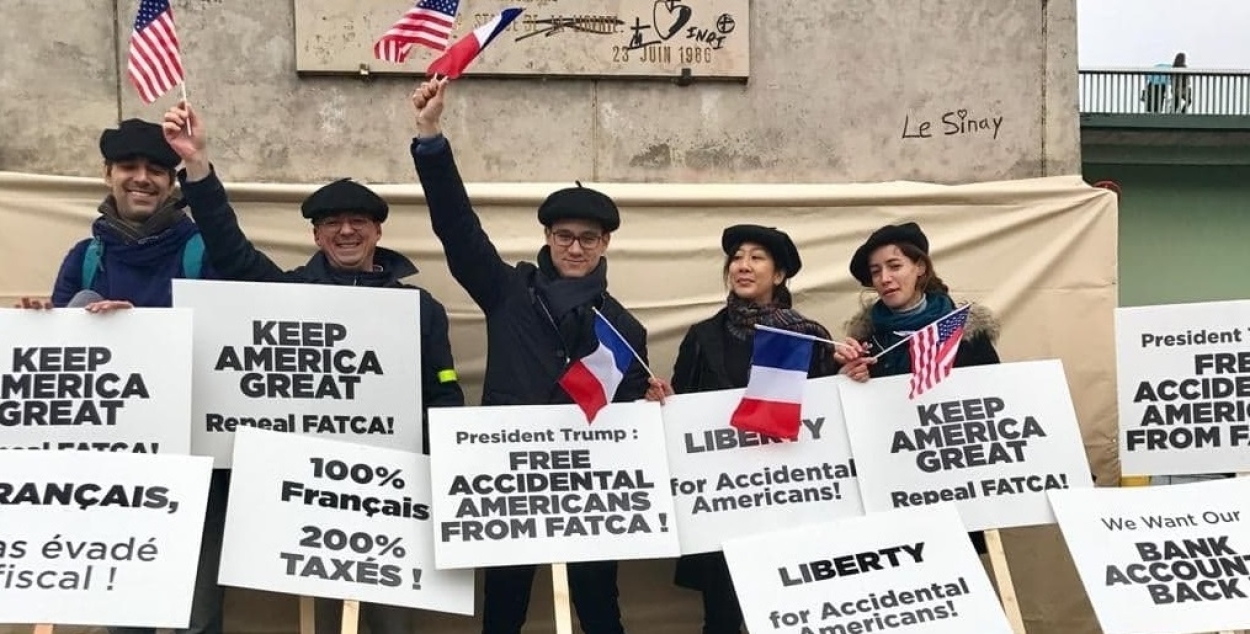 Above, the Association of Accidental Americans, during a November, 2018 demonstration on the Île aux Cygnes (Isle of Swans) in Paris

France's minister of the Economy and Finance, Bruno Le Maire, has assured the founder and head of the Paris-based Association of Accidental Americans that he is "fully aware of the practical difficulties faced" by France's accidental American citizens, and in fact, had himself "recently contacted Ms. Janet Yellen, Secretary of the American Treasury, in order to recall and defend the interests of France" with respect to the problems that he said continue to exist as a result of the U.S. tax evasion-prevention law known as FATCA.

What's more, LeMaire wrote in a letter to Fabien Lehagre that was dated Feb. 14 – and which Lehagre has posted on his organization's Facebook page – as the eighth anniversary of FATCA's coming into force across Europe approaches this November, France is continuing to "[reflect] on this problem with all of our European partners, in order to allow common responses, and to move forward."

"In particular, I mentioned" to Yellen "the question of the equivalence between the data we send, and the data we receive, which, despite the good will shown by the new American administration, can still be improved," Le Maire told Lehagre, in his letter.

At this point, Le Maire was referring to the fact that the U.S. doesn't provide the same data about U.S. bank accounts held by French citizens to France that it receives from France, about American citizens' accounts held there – a point often raised by European politicians, since the U.S. also doesn't provide such information under an international automatic data exchange program known as the Common Reporting Standard, which most of the rest of the world has signed up to.

"Thus, we continue to recall, whenever we have the opportunity, the spirit of the FATCA agreement, and the need to ensure that the exchange of information takes place on a balanced basis." 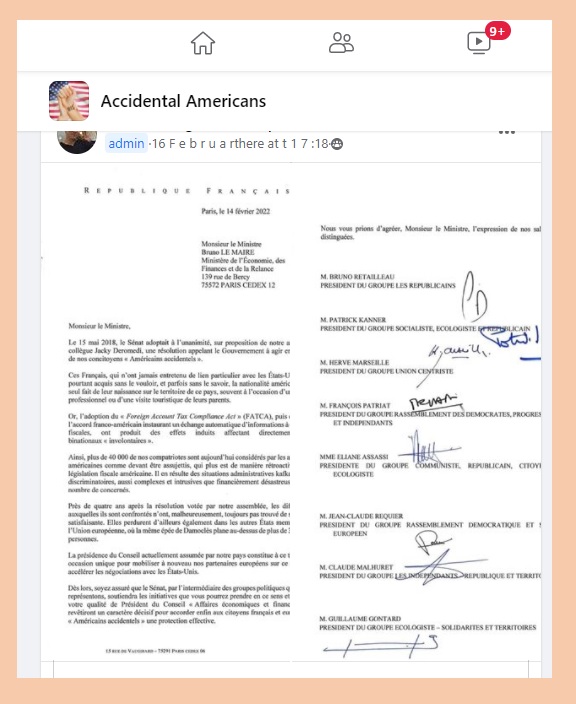 Lehagre received Le Maire's letter hours after a letter to Le Maire – signed by eight members of France's Senate – emerged, via social media in France (including the AAA's Facebook page, pictured left), which called on the finance minister to "finally grant French- and European-citizen 'accidental Americans' effective protection" from what they referred to as "Kafkaesque, discriminatory" predicaments that were often "financially disastrous for many [of those] concerned."

The eight members of the French Senate, who were said to represent eight of the body's political parties and groups, urged Le Maire to take advantage of the fact that since Jan. 1, and until the end of June, France holds the role of the Presidency of the Council of the European Union.

In their letter, which was written in French, the eight French Senate members began by reminding Le Maire that "on May 15, 2018, the Senate unanimously adopted, on the proposal of our former colleague Jacky Deromedi, a resolution calling on the Government to act in favor of our fellow 'accidental Americans'.

"These French people, who have never had any particular connection with the United States, have yet acquired unwittingly, and sometimes unknowingly, the American nationality [owing to the mere] fact of their birth in the territory of that country, often on the occasion of a professional stay or a tourist visit of their parents," the letter continues, still in French.

"However, the adoption of the “Foreign Account Tax Compliance Act” (FATCA), then that of the Franco-American agreement establishing an automatic exchange of information for tax purposes, have produced induced effects directly affecting these 'involuntary'" binationals.

"Thus, more than 40,000 of our compatriots are today considered by the American authorities as having to be subjected, moreover in a way retroactive, to U.S. tax law."

The letter goes on to note that now, "nearly four years after that resolution was passed by our assembly, the difficulties the accidental Americans are facing have, unfortunately, still not found a satisfactory solution.

"These problems also persist in other European Union member states, where the same sword of Damocles hangs over more than 300,000 people."

The recent exchange of letters by French politicians is the latest development in a years-long campaign by accidental Americans in the U.S. to get the lawmakers in the countries in which they live and are citizens of to challenge the U.S. over the way it treats them, under FATCA.

As this publication and others have frequently reported, these accidentals believe they shouldn't be expected to have to file tax returns and potentially pay taxes to a country in which they have lived only briefly, if at all, as babies, and that the countries they live in now as citizens and taxpayers ought to stand up for them in negotiations with the U.S. more than they do.

In spite of a unanimous vote by the European Parliament in July, 2018 (470 to 43, with 26 abstentions) in favor of a resolution that called on the EU's lawmakers to support the bloc's estimated  300,000 accidental Americans (by, among other things, re-opening negotiations with the U.S. over FATCA), nothing of significance has yet been achieved on behalf of the accidentals by Europe's elected officials talking to their U.S. counterparts.

Periodically EU officials have formally agreed that something needed to be done, such as in November, 2020, when, as reported, a number of Dutch lawmakers known to be familiar with the accidentals' issues announced that they would be joining forces with their French counterparts in asking the EU Commission to  raise the accidentals' plight with the U.S. Thus far, however, such discussions have never seemed to get to the point of being dealt with by the U.S. at a level at which changes actually might begin to be made.

Most recently, as banks and other financial services companies in Europe (and elsewhere outside of the U.S.) have begun pressuring those of their account-holders whom they know to be American -- typically because they have given a U.S. birthplace -- to provide them with their U.S. Tax Identification Numbers, such as a Social Security number, the pressure has begun to build on the very large but unknown number of accidental Americans who lack such numbers, as these banks and institutions say they cannot keep them as clients without them.

To read an English translation of the letter sent to Fabien Lehagre, president and founder of the Paris-based Association of Accidental Americans, dated Feb. 14, 2022, by Bruno Le Maire, France's Finance and Economy minister, click the green "next" box (below right)...