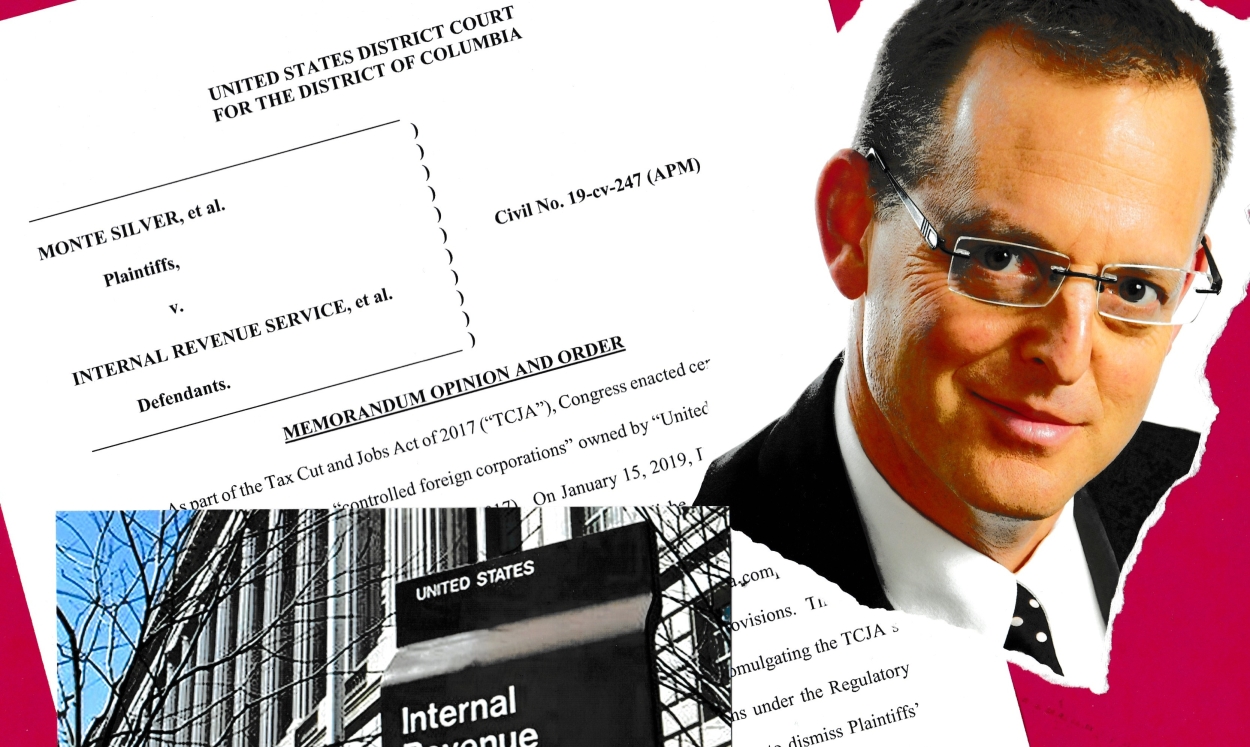 The U.S. government has cited a number of issues, including various federal regulations having to do with such things as "standing" and "unlawful disclosure of a tax return", in its official response to Israel-based U.S. tax attorney Monte Silver's latest legal challenge to President Trump's Transition Tax regulations, according to a posting on the Silver & Co. website.

In the posting, which may be viewed by clicking here, Silver (pictured above, next to a copy of his original filing), says he has "every expectation that the [court's] decision" will be made "around September, October" of this year.

Commenting on the U.S. goverment's appellee brief, Silver added: "You will note the many issues they raise – relating to standing, jurisdiction and unlawful disclosure of tax return. All precedent setting. All to be decided.

"We have our final brief to file within a few weeks, [after which an] oral hearing and decision [will follow]."

As reported, Silver originally launched his Transition Tax challenge in U.S. District Court in the District of Columbia back in February, 2019, after certain asked-for last-minute changes to Trump's Tax Cuts and Jobs Act weren't made, thus leaving intact what he and others claimed was its harsh treatment of owners of small, non-U.S. businesses owned by Americans.

Among his arguments was that the Transition Tax violated certain protections designed to help small businesses that are contained in the government's so-called Regulatory Flexibility Act.

However, in March of last year, the court found that Silver and his company "lack[ed] constitutional standing to pursue their claims." Silver has refused to give up, and was back within weeks with a "motion for reconsideration and motion to amend" his original claim, alongside a separate "supplemental brief in opposition" to the U.S. government's motion to dismiss his challenge of another element of the TCJA, known as the GILTI (global intangible low-taxed income) tax.

According to legal websites, the U.S. Anti-Injunction Act dates back to the 1700s in its earliest versions, and states that U.S. courts are not permitted to "grant an injunction to stay proceedings in a State court except as expressly authorized by an act of Congress, or where necessary in aid of its jurisdiction, or to protect or effectuate its judgments."

Silver and his lawyer, Lawrence Marc Zell, have been asked for a comment. The court documents weren't immediately available on the District Court's website.

'Failure to consider impact
of TCJA on small businesses'

Silver's original lawsuit  argued that the final version of the TCJA regulations failed to contain a "regulatory flexibility analysis" that is required by the Regulatory Flexibility Act, a U.S. law that requires federal agencies to review regulations for their impact on small businesses.

"Rather than attempt to find potential solutions for small businesses with regard to the TCJA as required by law, Defendants [the IRS, the Treasury, IRS commissioner Charles Rettig and Treasury secretary Steven Mnuchin] issued impenetrable regulations on or about January 15, 2019 that impose many unreasonably complicated burdens upon a vast number of small businesses and small business owners" like the plaintiff, Silver argued, in his original, 19-page court document.

He also maintained that the final draft of the TCJA imposed "many unreasonably complicated burdens” on small businesses, and that the defendants had "made no effort to examine the helpless situation of small business, and did not attempt to address alternatives which would allow small business to comply with the law without undue burden."

In his filing Silver noted that the government argued that it didn't have to abide by the Regulatory Flexibility Act in the case of this legislation because it claimed the proposed regulations "would not have a 'significant economic impact on a substantial number of small entities," even though the Treasury had "recognized the burdens of small business compliance" two months earlier, and didn't offer "any factual support [of this claim] as required by law."

More in this category: « Dutch news website picks up on anti-FATCA feeling in Europe U.S. expat advocacy to be focus of AARO Zoom meeting Thursday »