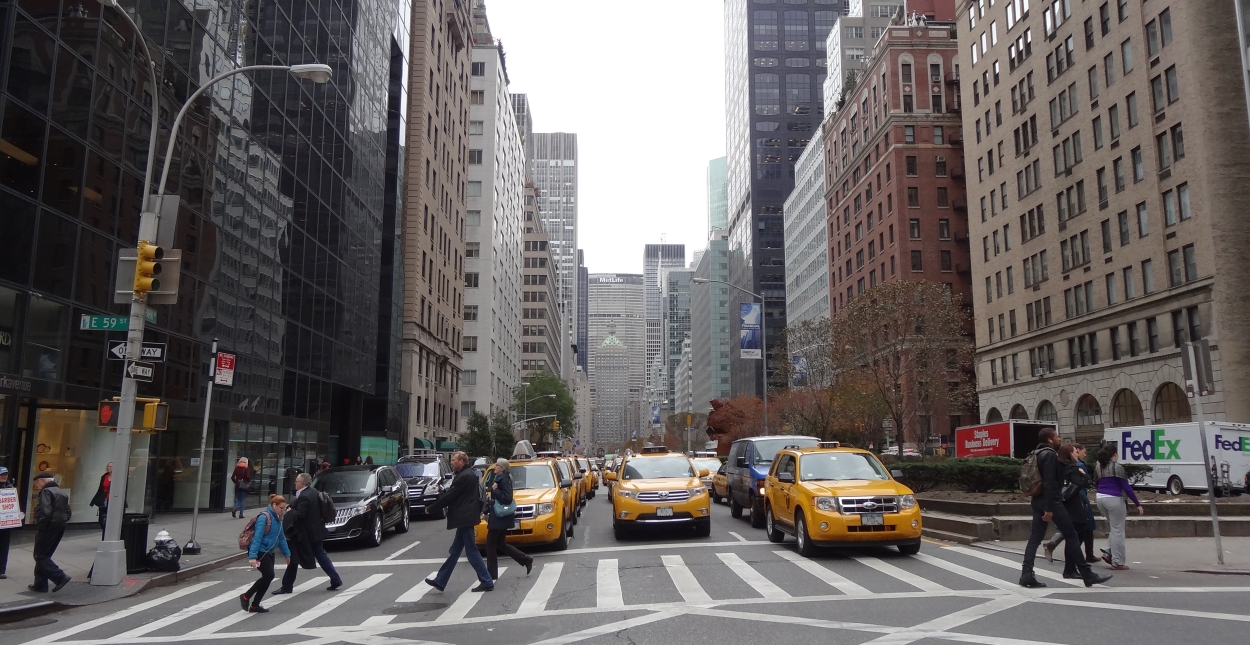 New York is one of a number of U.S. cities that benefit from the country's importance as a global financial center (and, some are saying, tax haven)

The U.S. has moved up to the top spot in the London-based Tax Justice Network's "Financial Secrecy Index," published today, with what the organization said was "the worst rating ever recorded" by a jurisdiction since it began ranking countries on the basis of their financial secrecy in 2009. 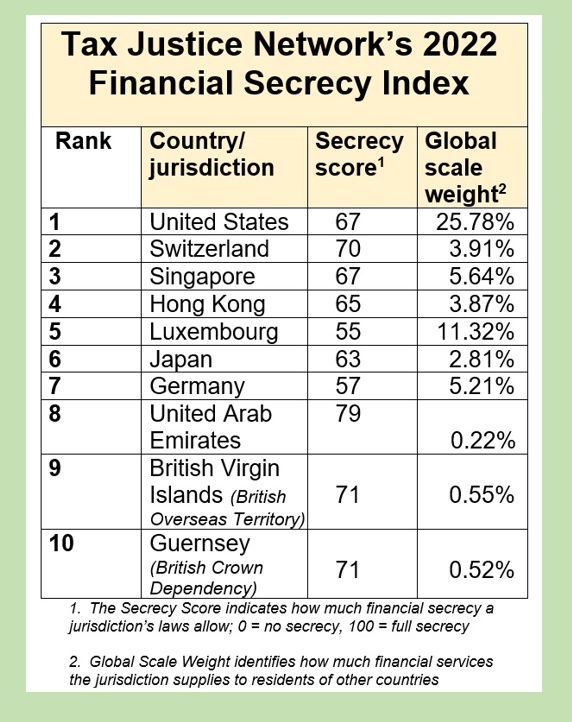 In a lengthy statement that accompanied the latest ranking – which it publishes every two years – the TJN said the U.S. came out on top this year "after it increased its supply of financial secrecy to the world by almost a third (31%) since 2020, resulting in the largest supply of financial secrecy ever measured" by the organization, in its complex system for ranking jurisdictions.

This increase, it said, was "partly driven by the U.S. worsening its secrecy score from 63 to 67 out of 100, mostly by again failing to meet international standards and practice on information exchange with other countries," a reference to the fact that the U.S. has thus far declined to participate in the OECD's Common Reporting Standard, an automatic information exchange regime that more than 100 countries have signed up to, on the basis that it doesn't need to because it already had a similar scheme for obtaining information about Americans' overseas accounts, known as the Foreign Account Tax Compliance Act.

The TJN said the increase in the U.S.'s latest secrecy score was also driven by "the U.S. increasing the volume of financial services it provides to non-resident [foreigners] by 21%."

This development, it went on, "is at odds with U.S. President Joe Biden's commitments and efforts to tackle global financial secrecy.

"Biden has made transparency reforms a key pillar of his foreign policy...[and yet] the U.S. now fuels more global financial secrecy than Switzerland, Cayman and Bermuda combined.

"In a separate study published in November 2021, the Tax Justice Network reported that the U.S. is responsible for costing the rest of the world US$20 billion in lost tax a year, by enabling non-residents to hide their finances and evade tax."

In 2020, the U.S. "leapfrogged" Switzerland to move into the No. 2 spot in the index, behind the Cayman Islands, which at that point took the top spot. It was the first time since 2011 when Switzerland didn't rank at the top of its list, the TJN pointed out at the time.

Even U.S. officials have acknowledged their country's role in enabling global tax evasion and money laundering by wealthy individuals to take place, the TJN noted, as it cited certain remarks U.S. Treasury Secretary Janet Yellen made in December.

In a speech she gave during what was billed as the first-ever Summit for Democracy, held in Washington, Yellen admitted that there was "a good argument that, right now, the best place to hide and launder ill-gotten gains is actually the United States," which she attributed to "the way we allow people to establish shell companies."

Globally, there is some good news, the TJN says: as it also noted in 2020,  when it produced its last Financial Secrecy Index, financial secrecy globally has in fact begun to decrease, as a result of recent transparency reforms. But, as it also pointed out in 2020, a few rogue countries, including the U.S. but also the UK, Japan, Germany and Italy – are moving the other way, and in so doing, are "responsible for cutting global progress against financial secrecy by more than half".

(The 2022 Financial Secrecy Index may be viewed by clicking here.)

Because the TJN released its findings in the early hours of Tuesday morning, it wasn't immediately possible to obtain a comment from U.S. officials to the index, or the data that the TJN says led to this year's rankings.

However, U.S. officials have been aware for years of criticism from other countries of the U.S.'s failure to join the other major G7 countries, as well as most of the rest of the world, in adopting the Common Reporting Standard (CRS), which the OECD says was "developed in response to [a] G20 request and approved by the OECD Council on 15 July 2014," and which obliges signatory jurisdictions to obtain information from their financial institutions and automatically exchange that information with other jurisdictions on an annual basis.

The CRS was introduced after the U.S. introduced FATCA (which came into force in 2014), and is widely seen to have been modeled on it, except that FATCA is not, for the most part, reciprocal. In other words, it obliges banks and financial institutions in countries that agree to enforce it to forward to U.S. officials data on all of their U.S. citizen and Green Card account holders, but it doesn't promise that the U.S. will return the favor by reporting to these countries on the bank and financial accounts their taxpayers happen to have in the U.S.

Critics suggest the reluctance of the U.S. to replace FATCA with the CRS is due to the fierce opposition to such a move that U.S. banks and financial institutions would mount – not only because the cost and hassle of having to comply with the CRS's requirements, but because as long as the U.S. stays out of the CRS, wealthy non-Americans can hide assets from their home country tax authorities by keeping them in U.S. accounts, including trusts.

Call for 'a global asset register'

Today's release of the latest Tax Justice Network secrecy ranking comes just a day before G7 finance ministers are due to begin two days of meetings in Germany, at which, according to the TJN, they are expected to recommit to enforcing sanctions on Russian oligarchs’ hidden assets.

With this in mind, the TJN says it is publicly calling on these G7 ministers to "commit to a 'global asset register'", in order to "bring law and accountability to the trillions in 'lawless wealth' secretively held offshore by wealthy individuals."

It adds: "An estimated US$10 trillion is held offshore, beyond the rule of law, by wealthy individuals through secretive arrangements – equivalent to 2.5 times more than the value of all US dollar and EURO bills and coins in circulation around the world today." 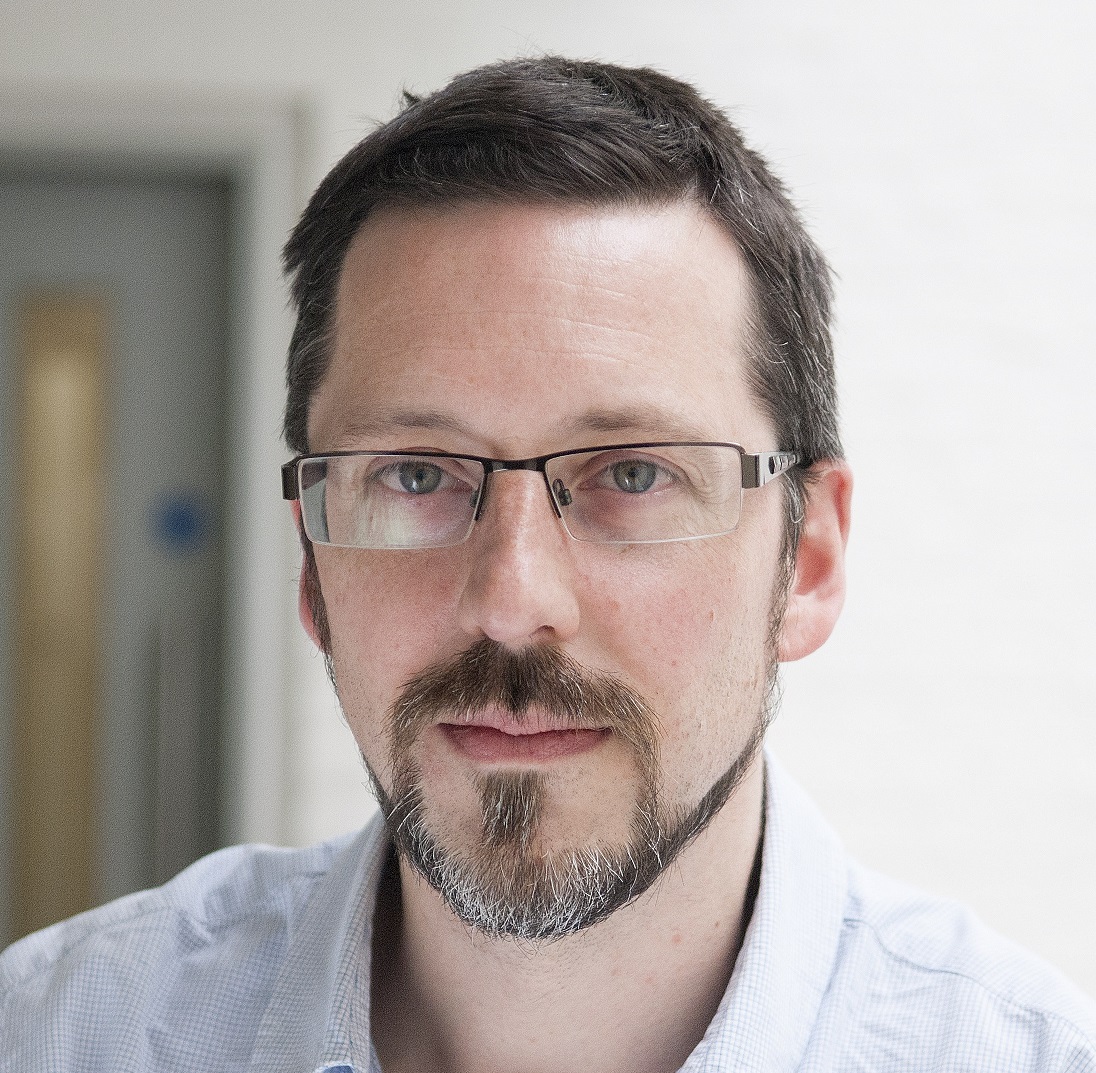 Arguing that the G7 countries’ continued "undermining of global transparency" has had the effect of prompting some economists to call for "a UN tax convention that moves rulemaking on international tax and finance out of the hands of the few rich countries who have repeatedly been shown to be some of the world’s biggest tax havens," Tax Justice Network chief executive Alex Cobham (pictured left) said, in a statement issued alongside the background about the latest Financial Secrecy Index: "Globally, we’re starting to curb the financial secrecy used by Russian oligarchs, and also by tax evaders, corrupt politicians and organised crime around the world to hide and launder ill-gotten wealth.

"But the U.S., UK, Germany, Italy and Japan cut back that global progress by more than half, fuelling financial secrecy instead of fighting it.

"The G7 must make clear where they stand in the fight against financial secrecy, by committing to a global asset register.”

Asked by the AXFNJ specifically to comment on the U.S. and its move to the top of the Financial Secrecy Index, Cobham said: "The U.S. is the only major economy that still hasn’t adopted international transparency standards on reciprocal information exchange.

"Ironically, this has made the rest of the world a more transparent place over the past decade, while making the U.S. a secrecy holdout for tax evaders, criminals and corrupt politicians from around the world to hide and launder wealth."

In wake of ICIJ's Pandora Papers

Today's publication of the latest TJN Financial Secrecy Index and its related materials comes less than eight months after a U.S.-based organization called the the International Consortium of Investigative Journalists (ICIJ) made global headlines last October with a trove of findings that also pointed to the U.S. having become one of the world's major tax havens. The ICIJ's so-called Pandora Papers research was based on almost 12 million leaked documents.

*  Although the U.S. adopted a "historic transparency law" in January 2021 requiring beneficial owners of corporations to be identified and registered, it "did not produce a significant secrecy score improvement for the U.S.", owing to "limited definitions of which legal entities and beneficial owners must register; 23 baked-in exemptions to registration, and an absence of requirements on all trusts"

*  "If the U.S. were to reciprocally exchange information with other countries by adopting the Common Reporting Standard, and become a party to [the] amended Convention on Mutual Administrative Assistance in Tax Matters, it would cut its supply of financial secrecy to the world by 40%, and drop to third [place]" on the TJN's Financial Secrecy Index, below Switzerland and Singapore"

*  Singapore "increased its supply of financial secrecy to the world by 14%," pushing it into the "top three" places in the TJN's ranking (see table, below). It was in fifth place in 2020 and 2018.

Below is a table that shows a selection of the TJN's Financial Secrecy Indexes, which it first published in 2009. (TJN officials stress that the methodology used to assess countries has developed so considerably since then that its irrelevant to compare the 2009 ranking with more recent ones, such as 2018, 2020 and the latest one.) Much has also changed since 2009, including the introduction of FATCA (2014) and the Common Reporting Standard (2017, 2018). 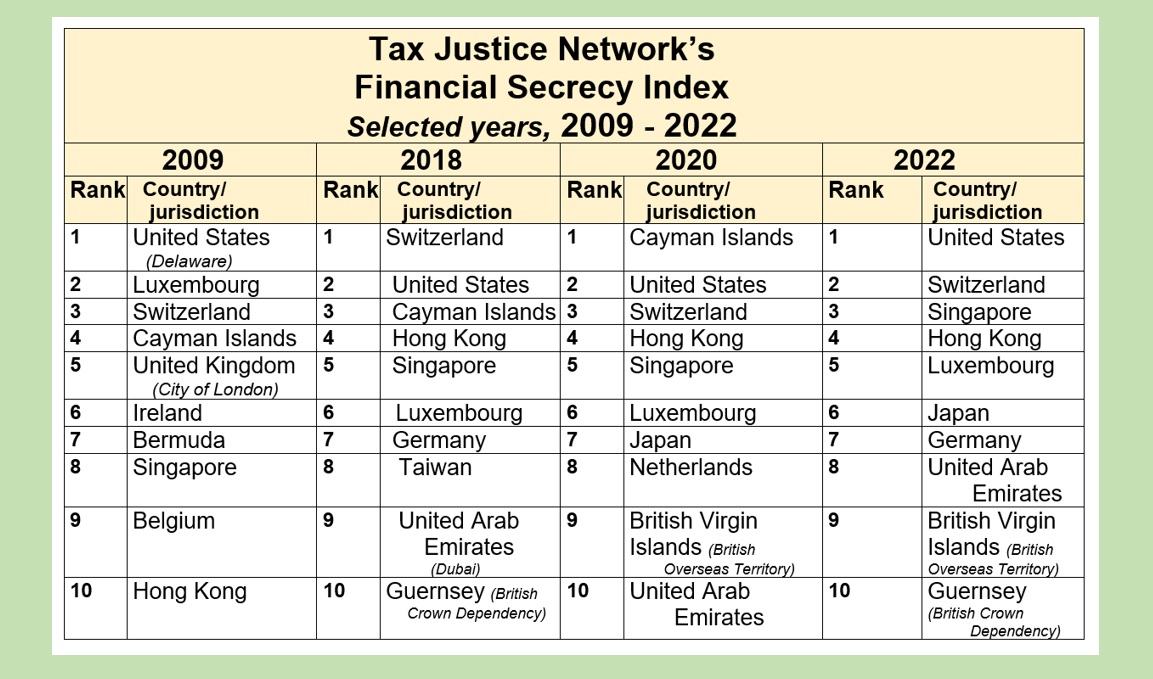 The 2022 Tax Justice Network Financial Secrecy Index may be viewed by going to https://fsi.taxjustice.net/. To read the release explaining the latest Secrecy Index, including background and context, on the TJN's website, click here.

To find out about a live Zoom webinar today (May 17), at which an international panel of experts will discuss this latest TJN secrecy index  – beginning at 2pm BST – click here.