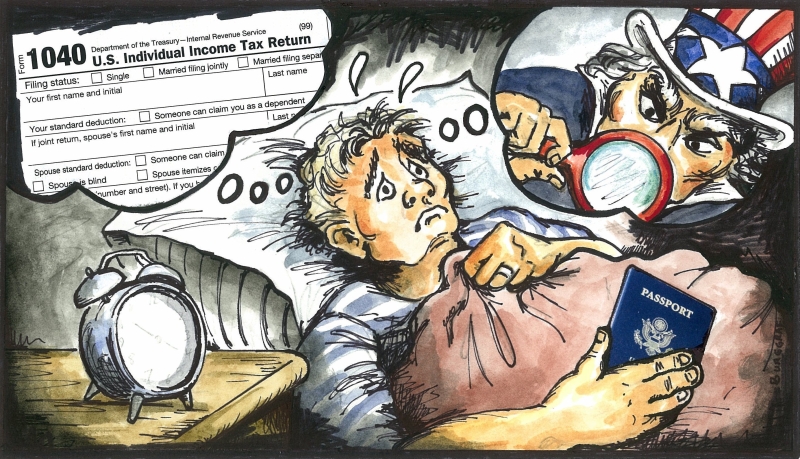 Like folks everywhere, Americans are often surprised to discover how different things can be when they live abroad. Sometimes the differences are small; sometimes they're massive. Often they can be hilarious...

In recent years, as the U.S. has started coming after American expats for unpaid taxes and penalties, the surprise for some Americans has come in the form of what one tax expert we know calls "that OMG moment of realization" that hits when you discover what life-long citizenship-based taxation actually means, and will mean for the rest of your life, particularly if you happen to be an American living abroad who has no immediate plans to return to the States.

As Americans around the world prepare to celebrate Christmas – either where they are now, or with loved ones back home – we thought we'd mark this reflective time of year with a (mostly) humorous look at some of the moments we all have, during our overseas years, especially in the beginning, when "you really know you're an American expat", particularly but not exclusively in connection with taxes and financial matters. (This was compiled with help from some of our friends, and first published on this site in 2019. If you'd like to contribute to this year's version, please see the end of the article for details.)

*  You’ve spent one or more nights wide awake, worrying about some aspect of your U.S. tax situation (see image, above)

* You’ve used the words “gazump” or “gazunder” in a sentence (this would only be Americans living in the UK, where these words apply to when one is in the process of buying or selling a residential property and someone else comes along and offers more, or decides to lower an existing offer just before contracts are about to be exchanged)

* You know exactly how much the U.S. fee for renouncing one’s U.S. citizenship is, even though it’s not a straightforward number (US$2,350). And you probably also know how much it used to be, before the IRS raised it, when renunciations began to soar, and the revenue-raising possibilities became obvious (US$450), and a few years before that, when FATCA hadn’t been signed into law (no fee)

*  You find yourself singing along to "God Save the King" (as it now is), at an event in the UK, only to discover that you're actually singing "My Country Tis of Thee"

*  You are always doing taxes. Always. Either gathering information, submitting forms to either the IRS or the HM Treasury, or waiting to hear that you owe nothing to the U.S. after spending £10K+ to your accountant to prove it

*  You'll do anything to make sure that your expat Thanksgiving feast is fit for a Norman Rockwell painting – conforming to traditional expectations down to the last cranberry, even though you're living in a country where you'll be lucky to find such ingredients as canned pumpkin puree for the requisite pie, at least without some effort. Back in the States everyone was more relaxed (one year you even did sauerbraten…)

*  You find yourself starting to get used to sharing the sidewalk with a growling motorbike that's hopped the curb to get out of the stationary traffic, something that would never happen back home (in part because you'd be in a car, not on a sidewalk). (Possibly not everywhere in Expatland, but definitely the case in Thailand...)

*  At any given time of day wherever you are in the world, you know exactly what time it is "back home" (in whichever state you're from, and where your folks probably still are)

*  You may still be struggling with the local language wherever you are – France, Spain, Italy, China, even Britain! – but certain local words and expressions are slipping into your speech, as they are an accepted part of the local expat dialect. In China, these might include mafan, lihai and laoban; in Thailand, farang; in Hong Kong, gwailo; in Italy, ciao bello, come stai? meno male!; in Singapore, expats quickly find themselves using acronyms for just about everything, such as MBS for Marina Bay Sands; etc. (Additional suggestions welcome here!)

*  At the same time, you stubbornly cling to certain Americanisms, such as “all y’all”, “you guys”, “gimme a break” and so on (suggestions on other favorites welcome here!) because only you can get away with them, so you might as well…

*  If asked, without even having to give it much thought, you could name at least three famous Americans who have renounced their citizenship. (Typically your list will include UK Prime Minister Boris Johnson, whose name appeared on the Federal Register’s quarterly list in Q1 2017, meaning he had handed back his passport in the fourth quarter of 2016 or earlier)

*  Your miss having a refrigerator the size of a closet or a small room, as the one you have now is a small box located somewhere below your kitchen countertop, less than half the size of the one your folks have back home (and that’s not counting the freezer in their garage...)

*  You find yourself using your balcony and/or window ledges for additional refrigeration and freezer space when the weather permits, because, unlike the locals, you prefer your beer cold

*  When someone – such as a friendly young cashier in Tesco did recently (according to an American expat we know who lives in Scotland) – picks up from your accent that you're American, and politely asks whether you're on holiday over here, you find yourself wondering (our American friend relates) whether you should say what you're thinking, which is, "actually, I've been living here since before you were born..."

If you'd like to share a moment when an American expat knows for sure that they're definitely an American expat, email This email address is being protected from spambots. You need JavaScript enabled to view it..