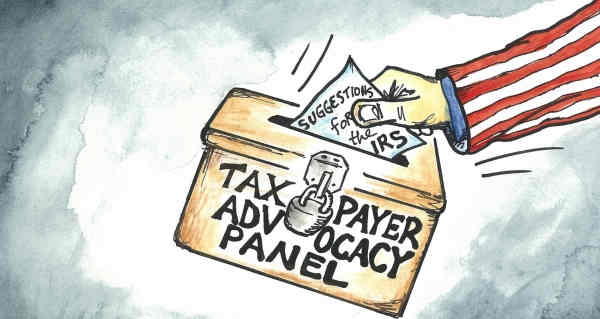 Last week, National Taxpayer Advocate Nina Olson retired from the role she held for 19 years. During this time, the IRS, of which the National Taxpayer Advocate's office is a part, adopted hundreds of her recommendations, and Congress introduced dozens of bills to implement others, 15 of which were signed into law, according to published accounts of Olson's legacy....

Although her successor has yet to be named, there is a sense that the NTA's office at the IRS is about to undergo a period of change, as any organization does when there are changes at the top.

The Taxpayer Advocacy Panel is a grass roots advisory organization of some 75 volunteers from across the U.S. that works alongside the NTA, and with  the IRS, to ensure that taxpayers' service issues with the IRS are submitted to those in a position to address them.

Here, that organization's sole overseas member, Paris-based Laura Snyder, pictured, details exactly what the TAP is, and why it matters to Americans who live outside of the U.S.

If you’ve never heard of the Taxpayer Advocacy Panel (TAP), don’t worry, you’re not alone. I hadn’t heard of it myself before last year, when I learned that it was calling for applications for those interested in volunteering to be a part of it.

As the IRS explains on its website here, the Taxpayer Advocacy Panel is a "Federal Advisory Committee" to the Internal Revenue Service, which exists to help identify tax issues of importance to taxpayers and provide a taxpayer perspective to the IRS on key programs, products, and services.

It also serves as a focus group that makes recommendations to the IRS and the National Taxpayer Advocate.

The job of TAP members is to listen to taxpayers, identify taxpayers’ issues, and make suggestions for improving the IRS's service levels and customer satisfaction.

The approximately 75 TAP members hail from each of the 50 U.S. states, the District of Columbia and Puerto Rico. It's only been within the last few years that they've made a point of ensuring that at least one of the panel members is based outside of the U.S., to represent the interests of U.S. expats, who – as readers of this news website will know better than some – have lifelong U.S. tax obligations, as long as they remain U.S. citizens or Green Card holders.

To my knowledge, I am the third such TAP representative of “international taxpayers,” and I am the only one currently serving.

There are no special educational or professional requirements to be a TAP member. It's not even necessary to be a tax professional of any kind – though some members are.

All that is required is that one be a U.S. citizen, be up-to-date personally with one's own federal tax obligations, be able to pass a fingerprint and background check, and not be a federally-registered lobbyist.

Members are chosen to represent a cross-section of American taxpayers: factory workers, professionals, teachers and professors, state government employees, and retirees (including military retirees); or, in my case, as noted above, Americans who live outside of the U.S.

In agreeing to be a TAP volunteer, individuals agree to commit to a three-year term, with the expectation that they will devote 200 to 300 hours a year to TAP work – or more, if they end up leading a TAP committee or subcommittee.

What the Taxpayer
Advocacy Panel does

The Taxpayer Advocacy Panel and its member have two principal activites:

(1.) to collect and examine taxpayer suggestions and, based on these, to come up with proposals that are then referred to the IRS; and

(2.) to reach out to the public, in their target population sector.

The work of examining taxpayer suggestions and preparing referrals for the IRS is done entirely by the Taxpayer Advocacy Panel's committees, of which there are currently six.

The areas of focus of the first five of those committees may be surmised by their titles. As for the sixth, the Special Projects committee, it focuses on identity theft and anything that gets categorized as “international,” as well as taking on any topics that are not covered by the other five committees.

I could go on – there's a lot to tell you about the workings of TAP – but for space reasons I'll try not to go into too much detail here.

Meetings are a key element of TAP's work, and although in-person meetings do take place when possible, much of TAP's work is done "virtually," via email and online.

Many meetings, most notably full committee meetings, are open to the public. (Notifications of these are posted on the Federal Register's website, and anyone who wishes may dial in to join them.)

Because I'm the only international member, I was assigned to the Special Projects committee, as well as to the subcommittee tasked with international matters.

Suggestions submitted to TAP are screened and categorized, and then, after a TAP subcommittee has formulated a proposal for improvement based upon a taxpayer suggestion, it goes through a quality control review before it is submitted – first for the full committee's approval, and then for the approval of the Joint Committee, which is made up of the chairs of each of the six committees.

Only at this point is the TAP proposal formally submitted to the IRS.

The IRS is then required to respond to the proposal within 60 days.

Its response must be detailed, and must indicate whether the proposal is to be adopted, partially adopted or not-adopted.

If it's to be adopted, then the IRS must indicate a projected date for implementation. The IRS may also respond that the proposal is “under consideration” – this can occur if the proposal cannot be implemented immediately, for example, due to budgetary or system limitations.

If the IRS "non-adopts" a proposal in whole or in part, TAP can formulate and submit a counter-response, to which the IRS is required to respond within 30 days. TAP staff analysts, meanwhile, are tasked with tracking proposals after their acceptance in order to verify their implementation.

As I mentioned above, the other part of TAP members' mission is to engage in public outreach activities. There are two reasons for this, in line with everything I've already explained:

(1.) to inform the public of the existence and the objectives of the Taxpayer Advocacy Panel, and

(2.) to solicit taxpayer suggestions for improvement of the IRS.

This outreach can take various forms, including articles like this one.

Another would involve TAP members attending events at which they are able to interact with the taxpayers they represent.

For me, living in Paris, for example, this might involve my giving a presentation to a community group there, such as a gathering of the Association of Americans Resident Overseas; or perhaps manning a TAP booth at a trade show sponsored by the American Chamber of Commerce in France, or some other entity.

What the Taxpayer
Advocacy Panel doesn't do

This doesn't mean taxpayers can't submit suggestions for improvement that result from the taxpayer’s own individual experience; in fact, an individual’s experience can oftentimes clearly expose an underlying systemic issue.

In other cases, the underlying systemic issue may at first not be clear, but it may become clear as result of TAP’s careful study of an individual taxpayer’s suggestion.

Those with specific problems that do need addressing, meanwhile, are urged to contact the Taxpayer Advocate Service (TAS), which, as noted in the introduction to this article, is a part of the IRS, and which until recently was headed by Nina Olson. The Taxpayer Advocate Service's mandate is to help individuals who are struggling with specific problems that they've not been able to resolve through normal channels.

Some of TAP's recommendations

Even though the Taxpayer Advocacy Panel has only had a representative for the American expat sector for a few years now, it's already begun to have an impact on the complications some taxpayers living overseas have experienced. Here are three examples:

1.) TAP has proposed to the IRS that the so-called "authentication options" used by taxpayers to access online self-help tools be modified, in order to better accommodate those living outside the United States, such as by accepting foreign phone numbers and foreign addresses.

2.) TAP has encouraged the IRS to seek ways to enable those international taxpayers who have not yet been able to obtain a U.S. Social Security number to file their tax returns without them.

3.) TAP has suggested ways that IRS publications might better communicate with taxpayers living overseas, and thus reduce confusion some are having with respect to: (i) the address to which manually-submitted returns filed by those living outside the United States should be sent; and (ii) how to claim deductions for out-of-pocket health insurance premiums, including those paid to foreign insurers.

What you can do

As a U.S. taxpayer living outside the United States, there are several things that you can do to help me, and other Taxpayer Advocacy Panel members, to make the system as good as it can be.

For one thing, you can submit suggestions of areas that need improvement.

The best way to do this is via the website: https://improveirs.org/speakup.aspx.

In submitting your suggestion, you should be as clear and as specific as possible. This is because if the TAP members screening your suggestion are not able to understand it, it'll be less likely to get followed up on.

(If you do submit a suggestion via that link, do please feel free to drop me a short note to let me know, so I can try to keep a look out for your suggestion as it makes its way through the TAP screening process.)

Another thing you can do, at any time, would be to notify me, as the official TAP representative for Americans living overseas, of any possible outreach opportunities you become aware of.

As noted above, I could give a brief presentation about TAP at an event at which the audience is likely to be mostly or all American expats; or you might invite me to submit an article, such as this one, to a publication or website that targets Americans living abroad.

I might find it difficult to get to an event in Thailand, certainly at short notice; but if your event is set to take place in Paris, especially if it's in a particular western suburb, my participation is all but guaranteed. And for events taking place outside of Paris, let me know about it and I will see what I am able to do.

If I can't make an event in person, I still might be able to participate, via Skype or WebEx.

Contact me as follows: By email, at This email address is being protected from spambots. You need JavaScript enabled to view it..

And if for any reason you'd rather contact the TAP office than me, it's here: https://taxpayeradvocate.irs.gov/contact-us

Laura Snyder is an American citizen who has spent the past 24 years living abroad, 22 of them in Paris. Originally from Eureka, Illinois, she joined the Taxpayer Advocacy Panel in December 2018, and expects to complete her three-year term in December 2021.

More in this category: « From the front line: How a routine Form 3520 filing can easily go (eye-wateringly expensively) wrong – and did Opinion: What frozen bank accounts of U.S. citizens in Europe could mean for U.S. citizens elsewhere »