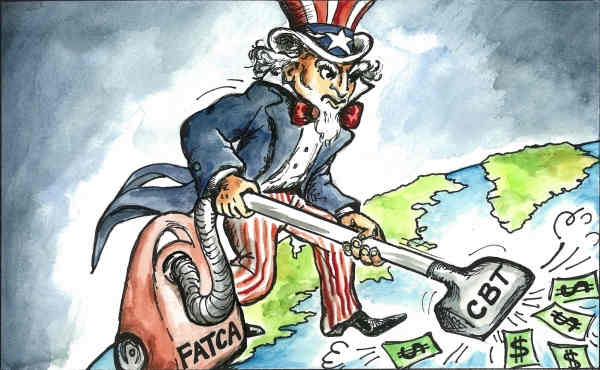 Over the last few weeks and months, more media attention than usual has been paid to the 2010 Obama law known as the Foreign Account Tax Compliance Act (FATCA).

And invariably, we have been noticing, journalists from respected media organizations like The Guardian and Financial Times newspapers in London keep referring to it as a “tax evasion law,” no doubt because that was its original purpose.

That may well have been true in 2010, says Toronto-based expat lawyer and expat rights campaigner John Richardson...

But, he argues here, as anyone familiar with FATCA's massive impact on individuals who don't live in the U.S. now – and indeed haven't for decades and possibly never did, and are tax residents of other countries – it has evolved into an all-but- impossible-to-avoid "extra-territorial money-sucking machine."

It has also made it very difficult for such individuals to engage in normal financial and retirement planning – or even to get, and keep, a local bank account.

And while it may remain a disincentive for Homeland Americans to attempt to hide their wealth (the way some used to) in Swiss banks, FATCA (along with the Common Reporting Standard, as the OECD's global version of FATCA is called), is now playing a role in enabling the U.S. to act as a tax haven to wealthy individuals in other countries who are seeking to keep their personal wealth from their own tax authorities.

The fact that the U.S. hasn't signed up to the CRS, arguing that it has no need to  – because FATCA gives it all the information it needs to know about its own citizens – helps to make this possible, Richardson points out.

Whatever its original intent, the main effect of FATCA in 2019 is not on protecting the U.S. tax base from tax evasion, by means of secret overseas bank accounts. At this point, in fact, to call it a "tax evasion-preventing law" is disingenuous.

In 2010, FATCA was a so-called "revenue offset" provision to the 361-page domestic jobs bill known as the HIRE Act. Tax evasion-prevention might well have been on the minds of those who drafted the bill, but what few today remember is that the HIRE Act had nothing to do with tax evasion.

Incredibly, FATCA lurked largely hidden and un-commented on by most mainstream media organizations, inside the "Hiring Incentives to Restore Employment Act", when President Obama signed it into law on March 18, 2010.

As those who remember the bill's progress through Congress will recall, the HIRE Act actually quietly subsumed the component that we now know as FATCA, which in turn had evolved out of something called the Stop Tax Haven Abuse Act of 2007.

Today, though, FATCA's most noticeable effect is not that it is protecting the U.S. tax base by reducing tax evasion.

Rather, it is the way that it's expanded the U.S. tax base forcefully into foreign countries around the world – a phenomenon that these countries have largely accommodated by agreeing to enforce it, on behalf of the U.S., via specially-drafted inter-governmental agreements they have signed.

That said, lawmakers in some countries, such as France, have lately begun to question the arrangement.

Importantly, FATCA's ability to extract money from other countries is facilitated by America's peculiar and unique citizenship-based tax regime, which makes U.S. citizens subject to worldwide taxation wherever they live, throughout their lives, even if they have spent most or even all their lives outside its borders, and happen as well to be the tax-paying residents and citizens of other countries.

Think of it. One day the "FATCA Express" arrives on your shores, and commands (under threat of sanction) that your government, and all your non-U.S. banks and financial institutions, track down all the U.S. citizens (as the U.S. defines them) living within your borders, and turn their banking details over to the U.S. tax authorities (Internal Revenue Service), by means of an Inter-governmental Agreement that they happen to have already drawn up.

In other words, FATCA allows the U.S. to define which residents of other countries it can claim as U.S. taxpayers. That it may also have something to do with stopping tax evasion is another subject, possibly related, except in the majority of cases, when it merely has to do with coming after non-tax-avoiding, ordinary citizens of other countries who fit some definition of being a "U.S. person".

In order to understand what's going on, it's useful to keep two FATCAoids in mind:

1. Only some countries confer citizenship based on having been born in the country.

2. There are only two countries that impose taxation based on citizenship.

The United States is the only country that does both.

Therefore, FATCA is really about hunting for people who were, as Bruce Springsteen famously put it, "Born In The USA". Whether or not they have ever lived in the USA, or even identify as being American.

'Time to change the narrative'

It is increasingly obvious that the the time has come to change the narrative.

Journalists, academics, bankers and other professionals must stop referring to FATCA as a "tax evasion law", implying that its chief purpose is the protection of the U.S. tax base from would-be tax evasion by its citizens, and start referring to it as a law that has expanded the U.S. tax base into other countries, through the accompanying tool of citizenship-based taxation (CBT).

Because, as I see it, those who continue to misrepresent what FATCA actually does are complicit in assisting the U.S. to tax the nationals of other countries.

As we have seen in recent months in Europe, where, as a growing number of newspapers and other media outlets have been reporting, thousands of accidental Americans are said to be in danger of losing their local bank accounts if they don't get an American Social Security number (SSN) – in other words, for many, officially entering the U.S. tax net, with all the implications this will mean for them – at once.

The U.S. Treasury, therefore, is now determining which citizens of other countries around the world, who happen to have legacy ties to the U.S. in some way, will, or will not be able to have a bank account where they live.

It's obvious that this sorry (and ridiculous) state of affairs impacts, in the form of a sanction, both sovereign nations and their citizens.

Impact of FATCA on sovereign nations

The impact on these other nations and their citizens is nothing less than an attack on these countries' very tax bases.

Look at the Tax Cuts and Jobs Act, President Trump's 2017 "tax reform" bill, for example. Here, the so-called Section 965 element takes a preemptive strike against the tax base of other countries by levying a tax on the retained earnings of business corporations in those other countries before a realization event that would trigger taxation in that country.

This is in violation of the intent of most tax treaties, which specifically prohibit one country from imposing taxation on the undistributed earnings of corporations located in the other country.

Impact of FATCA on individuals

As for the impact of FATCA on individuals, it's difficult to know where to start. There are hundreds, if not thousands, if not tens of thousands of examples of people who had been "tax resident" of other countries, but who are defined by the U.S. law as "U.S. citizens", and who therefore have entered the U.S. tax system, and/or then experienced problems maintaining normal bank and brokerage accounts in their country of residence.

For many such people, their best-intentioned attempts to comply with the U.S. tax regime, in other words, have too often seen these individuals' investment and financial planning opportunities suddenly becoming severely limited – and that's not to mention the tens of thousands of dollars they typically find themelves having to pay, in the form of U.S. tax compliance fees and related costs.

In 1962, U.S. president John F. Kennedy famously noted, in a speech at Yale University, that the "great enemy of truth" is "very often not the lie – deliberate, contrived and dishonest – but the myth – persistent, persuasive and unrealistic."

To be sure, few people know enough about FATCA, or understand it well enough, to actually lie about its purpose and effect.

But, as you will have realized, I believe that those who continue to portray FATCA as being principally about protecting the U.S. tax base from tax evasion are, in fact, complicit in perpetuating a myth.

The truth, as I have now made clear, is that FATCA is a tool that efficiently enables the U.S. to turn thousands of citizens and tax residents of other countries into U.S. taxpayers – with the full cooperation of these countries.

Which begs the question as to whether the world really should be allowing the United States to claim the tax residents of other countries as its own.

That is the question that I believe we all should be asking... and particularly, one that the lawmakers of the countries that are willingly accommodating this extra-territorial money-grab on the part of Uncle Sam should be asking.

John Richardson is a Toronto-based lawyer who specializes in U.S. expat issues. His website is CitizenshipSolutions.ca.