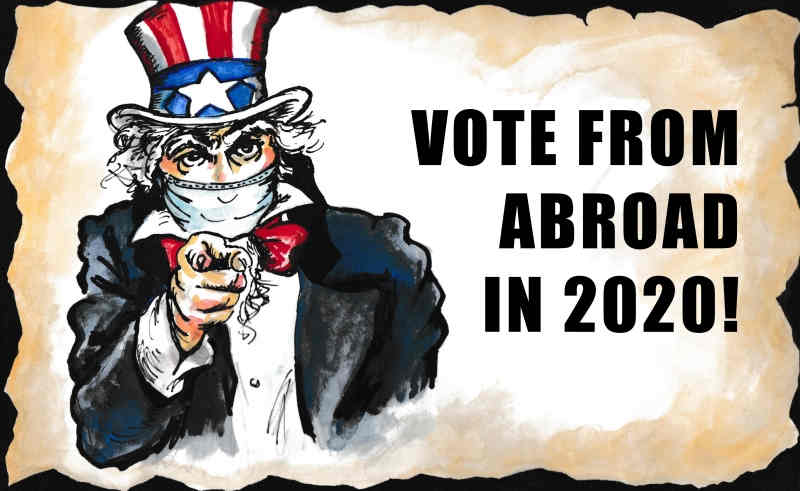 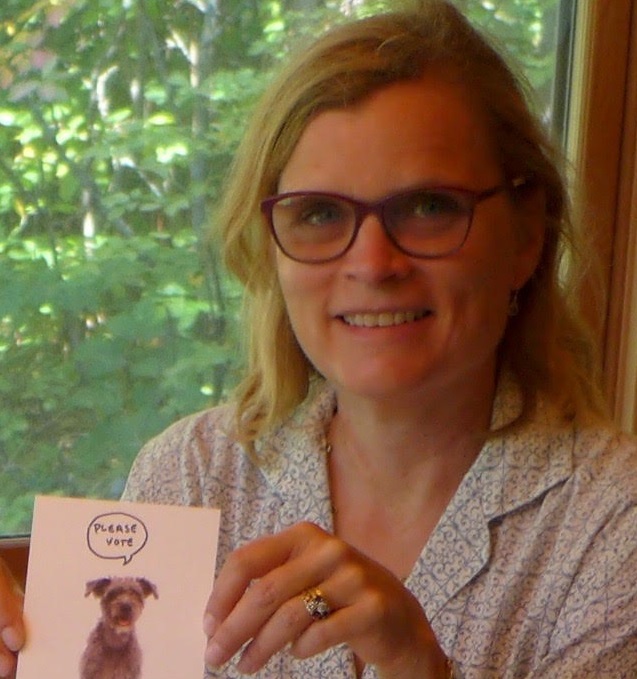 Laura Mosedale, pictured left, co-chair of voter registration for Democrats Abroad UK and a Federal Voting Assistance Program-certified voting assistance official, is herself a native New Yorker, who has now lived in London for 22 years.  As anyone who knows her will tell you, she is passionate about dispelling the myths and misconceptions about voting from abroad, to begin to unlock a potentially significant U.S. voting bloc.

Below, she shares some of her thoughts on the topic, as well as a bit of background into how Americans resident overseas have gradually gained their rights to vote over the years; why and how to exercise these hard-won voting rights; and a brief on some of the challenges that remain...

Contrary to myth, all U.S. citizens have a right to vote from abroad in federal elections, no matter how long they have been outside of the country, whether or not they ever intend to return, and even, in most circumstances, if they have never resided there.

As with other ‘outsider’ groups over the 243-year history of the United States, the voting rights of American citizens who live outside the country were not automatically granted, but have been fought for, step by step, over decades.

An important initial landmark was the passage of the Overseas Citizens Voting Rights Act of 1975, later modified in 1978, to clarify that voting in federal elections would not by itself lead to state or federal tax consequences.

This was followed by the Uniformed and Overseas Citizens Absentee Voting Act of 1986, which laid the legal basis for a vast expansion of access to voting by Americans living abroad.

Further barriers to overseas voting were subsequently removed after the passage of the Help America Vote Act of 2001 and the MOVE Act of 2005.

Today, there is simply no reason for overseas citizens NOT to vote from abroad in 2020.

And this being the U.S., the outcome will, after all, affect every person on the planet.

What's more, a parade of extraordinary events that have taken place thus far in the US in this year alone, from the murder of yet another black man at the hands of a white police officer, and the nationwide response to it, to the devastation wreaked by the coronavirus pandemic, have thrown our elected leaders, from the top on down, into the spotlight for all the world to see.

Living outside of the U.S. gives Americans a certain perspective into these events, of course. For one thing, we are often made keenly aware of how the rest of the world perceives our country.

So it's clear that this is the time for all of us to take a position – even if it is "just" to vote.

Don't forget, even though you may not place much of a value on your right to vote, there are those out there who think individual votes matter enough that they are actively working to prevent certain voting groups from exercising their voting rights, through voter suppression measures. (These efforts have been well documented by such non-partisan organizations as the League of Women Voters and the Brennan Center for Justice.)

"Voter fraud", meanwhile, though frequently invoked these days, is in fact extremely rare.  (Recently the president himself made headlines for voting by mail in the primary election in Florida, where he is now claiming residence, even while repeatedly attacking vote-by-mail as prone to massive fraud, which voting experts say is not supported by evidence.)

As pro-expat-voting groups point out, casting doubts on absentee voting and refusing to fund the United States Postal Service are both direct threats to the voting rights of overseas Americans, many of whom must vote by postal mail.

A message that resonates with many expats I meet is the fact that when expats don't vote, our members of Congress can feel they can ignore us without worrying they'll be held to account. If we started to vote in larger numbers, though, our representatives will be much more likely to begin to pay attention to us, and our issues.

So even if, like the New Yorker mention above, they know their vote won't affect the outcome of the election in their deep blue or red district, the fact is that their vote from abroad will send a powerful message to Washington.

While voters are busy focusing on the candidates at "the top of the ticket", meanwhile, it is heartening to know that there are thousands of candidates – many new to politics – who are running for Congress and for state and local offices, who are determined to represent their constituents, and not ‘the donor class’, and who are energized to re-affirm democratic values, and to restore America’s reputation in the world.

Overseas citizens can often vote for these "down ballot" candidates too.

And they should if they can, because states decide how their residents can vote, afford health care or drink clean water.

And as we see now, state leaders play a huge role in deciding how to protect their citizens from Covid-19, or not, and how their police forces go about their jobs.

The ‘potential power’ of the overseas vote

Working as a voting assistance official with the Federal Voting Assistance program over the last few election cycles has given me insight into not just the power of the overseas vote, but the potential power.

Some 5 million to 9 million U.S. citizens are estimated to reside outside the country. (The range of estimates is due to the fact that different organizations rely on different sources to compile their data.)

Even at the lower end of that estimate, that’s a lot of potential voters – 5 million is more than the populations of at least twenty of the smallest U.S. states, according to U.S. Census data. Only ten U.S. states are estimated to have 9 million or more residents.

The U.S. Embassy in London, meanwhile, estimates that as many as half a million Americans currently live in the UK alone.

These include university students (the UK is the top choice for Americans looking to study overseas); military service personnel and their families; workers, both temporary and permanent; “accidental” Americans who were born in the U.S. to British or other nationality parents; and international school families, faculty and staff.

In 2018, only around 330,000 U.S. citizens cast ballots from outside the country – and that was a record turnout for a midterm election year.

Yet even at this modest turnout level, we know overseas votes swung at least three U.S. House races – in California, Utah and New Jersey – and also gave the Democrats Florida’s only state-wide win. (Florida is a state that usually allows overseas citizens to vote "down ballot", even if they don't intend to return to live there.)

It is easy, therefore, to imagine the impact in 2020, if we all voted.

That brings us to the big question: How do we get all overseas citizens to vote this November?

First: reach out to your U.S. citizen friends and acquaintances with a simple question: have you requested your absentee ballot this year?

If they say no, ask them to go to votefromabroad.org now – before election officials are overwhelmed with absentee ballot requests in the fall.

In a few minutes, they can generate the one-page federal form that is both a registration (if needed) and a ballot request, with details for returning it to their state. We suggest that voters request to get their blank ballots by email, so they’ll get them faster.

They will then receive ballots for all the elections they are eligible to vote in for the calendar year.

This website has two features that similar websites do not: it allows most users to sign and submit their form and email it, without any need for printing, and it provides an online chat desk for user questions.

Expat citizens who have done this should then check within a week that their election official received their request, and mark September 21 as the date by which they should expect to find their ballot in their inbox.

While 26 states allow overseas citizens to return their voted ballots electronically, 24 still require voted ballots to be returned by postal mail. Given the pressures that postal services abroad and at home are currently under, voters who must postal mail their ballots should do so right away to ensure that they arrive in time.

Second: share this article with your U.S. citizen friends, and suggest they email any questions they might have to  This email address is being protected from spambots. You need JavaScript enabled to view it..

Peer-to-peer outreach is one of the most effective tools to encourage any behaviour, including voting.

So if you have a friend who is like the indifferent New York voter at the beginning of this article, you might say to them: "If overseas Americans voted in our true numbers, we’re more likely to be noticed by our elected representatives – and to be heard when it comes to issues like fair taxation."

And finally: Yes, your overseas ballot will absolutely be counted! States must count every valid ballot received before the election result may be certified. When you see a raced "called" shortly after the close of polls, that's a provisional assessment that the remaining outstanding ballots are not sufficient to alter the outcome. But the actual outcome cannot be certified until all the ballots have been tallied – including all the ballots from overseas voters!

Under normal circumstances, the Vote From Abroad registration team here in the UK that I'm a part of would be out running non-partisan, in-person voter registration drives now – we ran more than 50 at schools, universities, clubs and companies between January of this year, and the lock-down in March.

We are hoping that we'll be able to resume in person drives at some point this summer.

For now, though, we are just hoping to spread the word far and wide, including through websites like this one.

If you would like to join our team, or learn more about our campaigns to expand the franchise and make voting easier for overseas citizens,  email This email address is being protected from spambots. You need JavaScript enabled to view it.. We would love to hear from you.

VoteFromAbroad.org is a nonpartisan voter registration tool provided as a public service by Democrats Abroad.

More in this category: « Bright!Tax's Allyson Lindsey: 'Yes, expats w/o a U.S. bank account can still get the payment' Podcast Spotlight: Tax expert Schneider says China ‘not moving towards CBT’ »