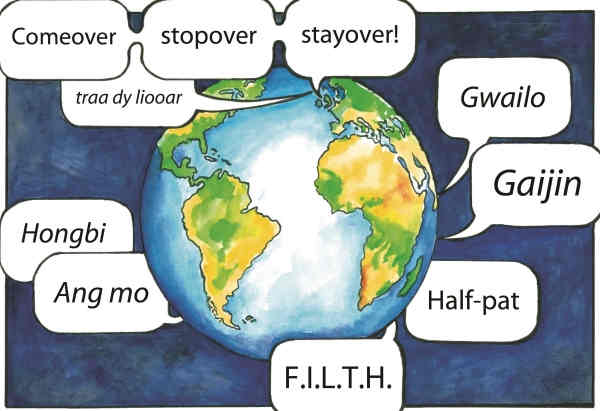 When the Hollywood version of Kevin Kwan's 2013 novel, Crazy Rich Asians, hit the world's cinemas recently, English-language commentators familiar with the multi-cultural Singaporean dialect took note of the "Singlish" words used in the film – such as "lah", which Singaporeans like to add to the end of a phrase for emphasis.

Some Singaporean locals, meanwhile, were reported to have expressed disappointment that the film didn't contain more of the Singlish expressions that filled the pages of Kwan's popular book. That's because, as readers of Crazy Rich Asians will know, the novel brims with Cantonese, Indian, Malay and Singlish words and expressions that locals use and expats typically pick up, or in some cases simply overhear, as they go about their lives in Singapore, and Southeast Asia generally. Dozens of these are explained in footnotes throughout Kwan's book.

These include alamak (an expression of shock or exasperation, like "oh dear" or "oh my God"); gum suey ah (Cantonese for "how rotten!"); ang mor gau sai ("red-haired dog sh**"); giam siap (Hokkien for "stingy", "miserly"); and dato (a Malaysian honorific, similar to a British knighthood; the wife of a dato is a datin).

At one point, Kwan explains hong bao – referred to by the lead character Nicholas Young in passing, as he explains to his girlfriend Rachel Chu a gift his uncle used to give him during annual Chinese New Year visits – as a "Mandarin [word] for the little red packets of money that are given out by married adults and the elderly during Chinese New Year to children and unmarried young people as an act of well wishing. Originally a token coin or several dollars, the hong bao in recent times has become a competitive sport, as wealthy Chinese strive to impress one another by giving ever larger sums."

Perk of being an expat

As many seasoned expats know, one of the perks of living abroad is learning to speak the local version of Singlish, whether it's in Spain, Italy, China, Greece, Cyprus, Mexico or Australia.

Indeed, even within countries, different cities and regions often have a trove of words and expressions that baffle outsiders, even as they’re embraced and treasured by locals.

The East End of London, for example, has characterful words like “geezer” and "bloke", as well as Cockney rhyming slang. (Rhyming slang means that if someone mentions a “pork pie”, they are likely to be referring to a lie, rather than a pastry made of pork).

Americans, like Brits and other native English speakers, enjoy an advantage over most other nationalities, of course, in that English is, for now at least, the main language of international business, whatever else may be spoken in the streets and shops outside of the office towers and five-star hotels in which this business normally takes place.

But as any expat who has spent time in the offshore world would tell you, expats living and working in the various major financial centers – along with those locals who interface with them on a regular basis – have evolved a lexicon of words and expressions all their own, in each of these jurisdictions.

This phenomenon is neither new, nor a problem; indeed, most expatriates who live in such financial centers as Hong Kong, Dubai, the Isle of Man, Jersey and Guernsey seem to take particular delight in learning, and using, the local expat patois.

This is the case even when the local expressions are seemingly insulting, as in the case of the time-honoured and, most would agree, out-of-date acronym FILTH – “failed in London Try Hongkong”.

(Anyone who might have thought that expression still had a ring of truth about it would have had a difficult time explaining why Fidelity superstar Anthony Bolton moved to Hong Kong from London in 2010.)

Many Americans and Brits admit a particular fondness for “Strine,” the brand of English spoken by Australians (or “Aussies,” as they might call themselves). If a dialect could swagger, Strine would, with its shrimps on barbies, Sheilas, wobbly boots, Bruces, G’days, good on yas, fair dinkums and dunnys.

One place with a unexpectedly rich expat/offshore vocabulary is the tiny but feisty Isle of Man, off the northwest coast of England, in the Irish Sea. Its historically small and, until recently, not particularly affluent population has, for example, cultivated an expressive set of words to describe the outsiders who have been frequenting its shores in large numbers ever since Victorians from Liverpool and Manchester began spending their summer holidays there.

Though there is some disagreement in Manx circles, most agree that anyone who has lived in the Isle of Man for fewer than 10 years is a mere “comeover”; those who have been resident for between 10 and 30 years are “stopovers”. You only get to be a full-fledged “stayover” when you’ve been there 30 years.

To be truly Manx, according to this line of thought, you have to have been born on the island; and a further level of purity is awarded to those who can attest to both sets of grandparents having come into the world on the island. (This is a rarity these days, with around 54% of the population estimated to have been born elsewhere.)

As in Jersey and Guernsey, on the Isle of Man, having both sets of grandparents born on the island is a formally acknowledged state by the European Union, which doesn’t permit such purebred islanders the freedom of movement enjoyed by others who have at least one EU-born grandparent or parent.

'Manx as the hills'

“I’m as Manx as the hills,” admits Gary Quaggan, director & General Manager at CapCall (IOM) Ltd, an Isle of Man-based business services provider (and author of a new book, But Not Big To Dinosaurs, whose island ancestry has been traced back to the 12th century. Quaggan says he passes the old family homestead, Ballaquaggan (“home of the Quaggans”) every time he travels to and from the island’s airport from Douglas.

(“Manx as the hills” is another Manx term.)

Quaggan’s name suggests it is Manx, because it begins with a Q; you will also find a lot of islanders named Craine, Quayle, Kennaught and Crellin. (The 44th U.S. vice president, in fact, James Danforth "Dan" Quayle, got his name from a Manx great-grandfather.)

Then there's Manannán’s Cloak, a reference to the heavy fog which was once thought to have been sent to the island to protect it from invaders, but now mainly inconveniences those seeking to arrive or depart by plane according to a fixed schedule. Manannán is a mythical Isle of Man (and Celtic) figure, who according to legend, was the IoM’s first ruler.

The land mass many Britons might assume Manx residents would refer to as the “mainland” – England, Scotland and Wales – some islanders like to call “the adjacent isle”, as if to keep it in its place.

Perhaps one of the most important expressions in regular use, and reserved for those who would dare, as one IoM “comeover” of nearly five years, put it, “to dis the IoM”, is the following put-down: “There’s always a boat in the morning”. (Jersey and Guernsey locals say this is in common use in those islands as well.)

The Isle of Man’s terms for resident foreigners – its comeover, stopover and stayover definitions – is echoed in Hong Kong’s gwailo and Japan’s gaijin, both of which date back centuries, but which came into frequent use when England was a major, and not always popular, force in Asia.

Some say these terms have now lost their original pejorative connotations; others say they never will.

Gaijin, which, spelled Gai-Jin, was the title of a 1993 James Clavell novel, means  "foreigner" (from gaikokujin, meaning “people from outside of the country”), while gwailo is a Cantonese word said to mean “ghost man” – a reference to the European foreigners’ relatively light complexions.

In Thailand, meanwhile, Caucasian foreigners are known as farang, (the Thai word for the guava fruit), though African-Americans and other foreigners of African origin apparently may be referred to as farang dam (“black farang”).

In Singapore and Malaysia mainly, but also in some other countries in the region, foreigners are known as ang mo, a Hokkien term which literally means “red haired.”

“It is a neutral expression, and I don’t think anyone would take offense,” a Singapore-based expat says. “Sometimes the kids use it when they are trying to be cool, but it just makes us laugh. You would use it like this: ‘the ang mos are taking all the good jobs’”.

Another word sometimes used by expatriates but mined from the Chinese spoken by many Singaporean and Malaysian residents is ah beng, a Singapore gangster stereotype. (The female equivalent is an ah lian.)

Explains the Singapore expat: “ This is the sort of chap who wears a leather jacket, bright jewelry and is a bit notorious. To call someone that in business would imply that he is a real shark.” Wikipedia notes that the "ah beng stereotype" is applied to "a certain group of young Chinese men in Southeast Asia, particularly Singapore and Malaysia, who display common characteristics such as having dyed hair, wearing loud fashion and predominantly speaking Chinese."

There is more to the expat lexicon in Asia than slang expressions for people.

Honkers, for example, an Australian term for Hong Kong, is one such word. A more recent, and currently very trendy expression, is hongbi, which refers to the Chinese renminbi and which, in Chinese, literally means “redback” – leaving the listener in no doubt as to China’s aspirations for its currency, vis-à-vis the American "greenback".

Another renminbi term is the “dim sum market”, a reference to the market for Chinese-currency denominated bonds. Dim sum, as expats living in Hong Kong know better than most, is a Cantonese specialty associated with Hong Kong, which is where these bonds are made available to Western buyers.

Another term expats living in China may be familiar with is "half pat", which refers to an expatriate who is hired there on a local contract rather than on a more generous expatriate one.

Below, we’ve assembled some favorite words from our own expat dictionary, arranged by jurisdiction, beginning with Singapore; the Isle of Man; Jersey, Guernsey Alderney and the Isle of Sark; and China and Hong Kong. In Part 2 of this piece, we'll share favourite expat words from some other popular jurisdictions.

If you have any  words, phrases or comments you’d like to add, do let us know!

More in this category: « What to expect from Budget Day in the U.K. American small biz owner in EU: ‘Trump’s made it impossible for expats like me to compete outside the U.S.’ »