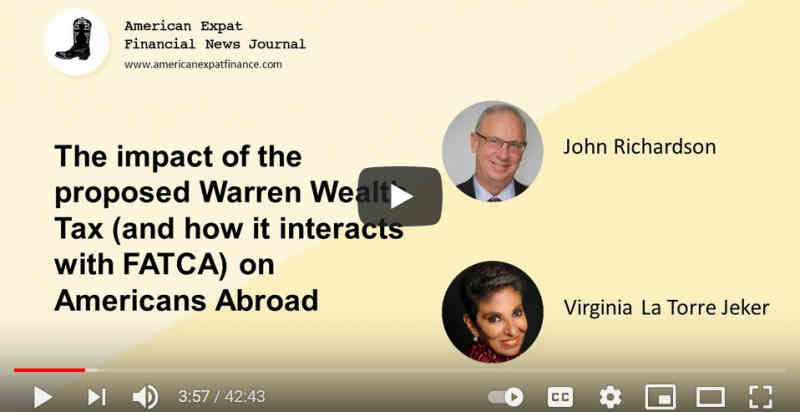 Americans resident outside of the U.S., particularly those whom the U.S. government considers to be well off, have been wondering how Sen. Elizabeth Warren's recently-unveiled "Ultra-Millionaire Tax Act of 2021" is likely to affect them.

Not helping their stress levels has been the fact that a number of firms that specialize in helping expats to renounce their citizenships have been warning that anyone who has been considering renouncing their citizenship has no time to lose if they hope to retain much of their accumulated savings when they do so, pointing to the bill's proposed 40% exit tax.

Warren, joined by Rep. Pramila Jayapal and Pennsylvania Rep. Brendan Boyle, unveiled the Ultra-Millionaire Tax on March 1. In addition to the 40% exit tax, it would levy a 2% annual tax on the net worth of households and trusts between US$50 million and US$1 billion, as well as a 1% annual surtax on assets above US$1 billion.

The bill could face opposition in the Senate, where the Republicans, many of whom are expected not to support the proposed tax bill, retain a slight advantage.

Richardson and La Torre Jeker have been regular commentators in recent years on the international tax regime as it affects American expats, having gone "looking for Mr FBAR" here in 2018, and again back in November, when they speculated as to what the Joe Biden victory would be likely to mean for expats.

To view some other of Richardson's most recent interviews, click here.

As reported, La Torre Jeker will be holding a one-and-a-half-hour-plus, live online training session for FBAR preparers and/or their clients next Tuesday, accompanied by Jimmy Sexton, another international tax expert who is also based in Dubai. The session will cost US$185 to register, and will begin at 7pm Dubai time (3pm GMT, 4pm CET, 10am EST).

More in this category: « The AXFNJ YouTube interview: The Federal Register's 'Name and Shame List' at a time of record renunciations 'HELP! I received my third stimulus payment check abroad. How can I cash it?' »