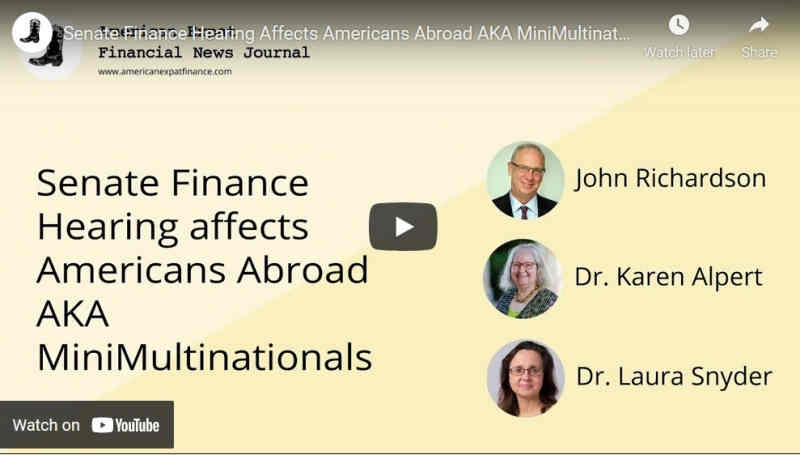 "How U.S. international tax policy impacts American workers, jobs, and investment" may have been the official title of last week's Senate Finance Committee hearing, but according to John Richardson, Toronto-based lawyer and regular commentator on the ever-evolving American expat tax and citizenship regime, "that title had almost nothing to do with what actually transpired" during the two-and-a-half hour event.

Even though, he adds, it should have...

In his latest AXFNJ Podcast, posted today, Richardson and his guests – Australia-based Karen Alpert, and France-based Laura Snyder (pictured above) – consider the key points that emerged from last week's hearing, which featured a succession of mostly Democratic lawmakers and tax experts, who focused almost exclusively on the taxation of major, multinational U.S. corporations.

Here, Richardson also issues an unequivocal "call to action" on the part of "all Americans resident outside the U.S.," whom he commands to "make their voices heard immediately" on issues he says the hearing was meant to have addressed, but failed to. He explains how they can access pre-written "submission templates" designed to make the submission process easier...

"What the [Senate Finance Committee] discussion was about last week was what direction that rules for corporate international tax, and America, should take – with a clear emphasis in the hearing on CFCs [controlled foreign corporations, a type of corporate entity that's registered and does business outside of the U.S., where its parent is based] – and...on increasing the way they're taxed," Richardson said early on in the podcast, which runs for around 25 minutes.

"[This] seems to be completely overriding the original intent of the [Trump Tax Cuts and Jobs Act] legislation, which was to move the United States, with respect to its CFCs, to a territorial tax system."

Later, Richardson observed that those witnesses who spoke during the hearing of the need to stop American multinationals from "offshoring", or moving jobs and work overseas for financial and tax reasons, seemed not to realize that in fact, not all American companies that currently operate outside of the U.S. are doing so for tax avoidance reasons.

"Take the dentist, or cafe owner, in Paris, who happens to be a U.S. citizen. Are they 'offshoring' U.S. jobs?" he asked.

"Many of these people believe that the only reason any American citizen would have anything whatsoever to do with any activity outside of the United States...would be to avoid [U.S.] taxation somehow."

This is why, he went on, "it is vitally important that [American expat] individuals impacted by all of this make their voices heard immediately."

To listen to this latest AXFNJ podcast, click here.

This is the ninth of the American Expat Financial News Journal's  ongoing series of webinars. To access the first, in which John Richardson interviews Marc Zell, the Jerusalem-based lawyer who is heading up a legal challenge against the U.S. State Department in Washington by a group of "accidental Americans" over what they say is the unconstitutionality and illegality of the current US$2,350 fee to renounce U.S. citizenship, click here.

To read about the launch of SEAT (Stop Extraterritorial American Taxation), which is based in France and headed by Dr. Snyder (who is also a lawyer and, for another few months, IRS Taxpayer Advocacy Panel member),  click here.

More in this category: « 'HELP! I received my third stimulus payment check abroad. How can I cash it?' 40-year NZ-resi American dual national, to Senate Finance C'ttee: 'Please consider us expats too!' »