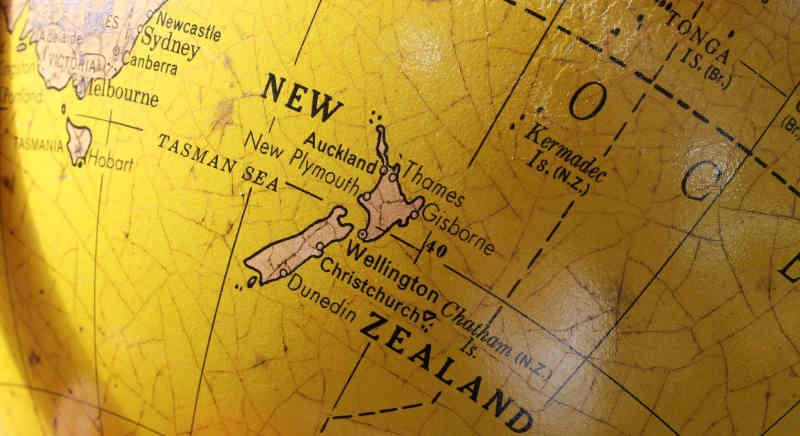 On Friday, April 2, the Washington, D.C.-based Institute on Taxation and Economic Policy published a report that has rocked the American expatriate community, with its revelations that "at least 55 of the largest corporations in America paid no federal corporate income taxes in their most recent fiscal year, despite enjoying substantial pretax profits in the United States".  The reason these expats were stunned is because many of them struggle with significant tax reporting obligations to the U.S...

...on top of the taxes they pay locally, and often have no choice but to pay thousands of dollars a year to tax professionals in order to remain compliant with the U.S. tax regime.

Here, one such American expat explains – in what she says is an excerpt from what she's drafted to send to the U.S. Senate Finance Committee, in the wake of its recent hearings on "How U.S. international tax policy impacts American workers, jobs, and investment" – why she believes that the time has come for the Senate Finance Committee's members stop focusing exclusively on America's already-well-pampered multinationals, and begin to get a grip on how the U.S.'s harshly extraterritorial tax regime continues to unfairly impact innocent Americans like her...

I am a single, 74-year-old, retired U.S. citizen with no offspring. I have lived in New Zealand, as a tax resident, for more than 40 years. My only family (my surviving siblings, their children and grandchildren) remain in the U.S.

I understand – and agree with – a need by the U.S. government to, where possible, prevent wealthy Americans, who are resident in the U.S., from hiding their wealth in foreign bank and financial accounts, in order to  avoid having to pay their fair share of what they rightfully owe Uncle Sam.

This is because, as they are permanent U.S. residents, they are benefitting from tax-funded services, and should pay for that.

Every other country in the world (except Eritrea) sets income taxes that are based on residence as the accepted norm.

I should like to mention here that like many other expats I have come to know over the years, I did not choose to live abroad for tax evasion reasons. 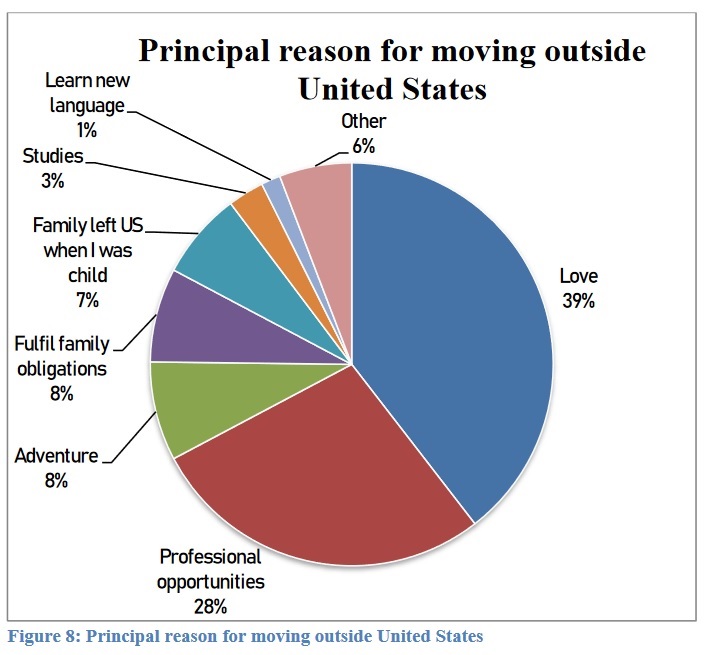 rs ago, average wages in New Zealand were far lower than they were back home in the States, while the lowest income tax rates here were quite a bit higher than the lowest rates back home.

(In case you've not seen it, a survey carried out in 2018 by Dr. Laura Snyder, the current overseas representative for the IRS’s Taxpayer Advocacy Panel, found that that "love" was the No. 1 reason given by the 602 American expats living in 47 countries who participated in the survey, for their decision to live abroad. This was followed by "professional opportunities" and "adventure". See pie chart, left.)

I also should say here that, during my four decades in New Zealand, I have maintained bank accounts in this country – like every other New Zealander does, and most other expats as well – because this is where I live. But I never have opened a bank account to hide anything, from anyone, and never would.

And while it's true that my savings are currently spread across several New Zealand banks, rather than being stashed in just one, that's simply because bank deposits in this country are not guaranteed (by the banks or by the government), the way they are in some other countries, including the U.S. (The U.S. Federal Deposit Insurance Corp., for example, typically insures a depositor's account in a U.S. bank for up to US$250,000.)

Anyone who remembers the global financial crisis in 2008 will recall that many people actually lost money when their banks failed, and their deposits weren't insured, or weren't insured above a certain amount.  So spreading one's savings out across various institutions is not being greedy, or sinister: it's being sensible, and many wealth managers would actually advise their clients to do this, rather than keeping all their savings in one place, particularly if there is no deposit insurance on offer at all. (Eggs in one basket, and all that...)

Of course, if you're an expat, having multiple accounts invariably makes reporting to the IRS even more time consuming and expensive each year than it would be otherwise; and if you forget to file foreign bank account reports each year that your accounts total more than US$10,000, the U.S. government might try to hit you with a penalty per each account (though lately the movement seems to be in the direction of a per-year penalty instead).

The point is, though, that there are all kinds of reasons one would much prefer not to have to maintain multiple overseas financial accounts, and none of them have to do with avoiding U.S. taxes.

I should mention here that I also understand totally the need to prevent large U.S. multinational corporations from “offshoring” – that is, moving their business operations overseas, in order to reduce their costs and save money on taxes.

Once again, though, I'm a woman who was born in the U.S. and who has spent the last 40 years in another country, a "dual national" living in my country of second citizenship, where I am subject to the laws of that country, like the other men and women and children who also live here.

Having been born in the U.S. 74 years ago doesn't make me a multinational company, or "controlled foreign corporation" (CFC), providing goods or services in some way to some parent organization in the U.S.! I am not, in other words, "GILTI" of anything!

Taxing me as though I were the off-shored operation of some U.S. multinational, therefore, is – as they'd say here in New Zealand – bonkers.

To be sure, if a U.S. citizen were living abroad temporarily, eg., on a work visa, with plans to return to the U.S. once a certain period of time had elapsed, paying U.S. taxes on their annual income, were it to exceed a certain pre-agreed-upon level, makes sense. I accept this.

But long-term, permanent residents of another country besides the U.S., like me, who have no intention of returning to the U.S. and who are, and have been, tax resident elsewhere for periods of time that vary, are another category completely.

Let me repeat: I am not working temporarily in New Zealand: I live here. And I have no plans to leave. Ever.

Yet in spite of this, every year I am required to report my financial assets to the U.S. Office of Financial Crimes Enforcement (FinCEN), as if I were a criminal, and to navigate the complexities of two very different tax systems in order to calculate, and where necessary, pay my U.S. taxes, each year.

It is true that there are many tax preparers in Expatland who specialize in looking after American citizens who are resident outside the U.S., and in my experience, I have to say that they are generally well-versed in one's U.S. tax obligations. However, some are not always all that knowledgeable as to how how these U.S. tax obligations fit together with the tax regulations, procedures, terminology, timelines, etc. of the country in which their client happens to live and pay taxes, as a tax resident.

Meanwhile, too often, the fees charged by these tax preparers end up far higher than the tax an ordinary expat like me ends up owing, once all the deductions (such as for taxes paid to the country where one lives) have been factored in.

The bottom line is this (whether or not one is a small business owner): The US extraterritorial tax regime makes it difficult for the American expat community to save, invest, participate in pension plans, and generally behave in a financially responsible way.

For example, retirement investments may be ‘foreign’ to the United States, but local to me. And why shouldn't I be able to plan for my retirement, while living overseas?

As David Kuenzi, founder of Madison, Wisconsin-based Thun Financial, has warned expat Americans repeatedly over the years, the U.S. tax code regards non-U.S. registered mutual funds as "Passive Foreign Investment Companies" (PFICs), and taxes them very punitively, if an American expat is un-wise enough to own them. Furthermore, each PFIC must be reported annually (on a U.S. tax form 8621), which apparently requires advanced accounting skills to understand, and is said to be particularly time-consuming to complete.

What this means is that as an American citizen living permanently in New Zealand, if I had invested in the New Zealand KiwiSaver retirement investment plan – like so many other Americans living in New Zealand have learned, to their distress, over the years – I would have found myself facing punitive U.S. PFIC taxes on my savings, in addition to being unable to exit the KiwiSaver plan until I reached the age of 65.

If, however, as an American citizen living permanently in New Zeland, I had chosen instead to save for my retirement by investing in the U.S. stock market, and if my lifetime total cost on these investments were to excede NZ$50,000 (US$35,300), I would face an even more draconian New Zealand "Foreign Investment Fund" tax on this amount.

I could go on here, but suffice it to say that all Americans who live permanently in New Zealand are unfairly penalized in their attempts to save for their retirements whichever way they go! Because BOTH the U.S. and New Zealand "punish" us for the "crime" of being expats.

And as I understand it, the same is true, to a greater or lesser extent depending on where exactly one lives, for Americans living as tax residents of other countries around the world.

There are double-tax treaties in place in many countries around the world, but they differ with each country, and aren't always effective in protecting against double taxation.

What I would like to tell the Senate Finance Committee is this:

Editor's note: This piece was submitted by a regular reader of the American Expat Financial News Journal who, as she explains above, is an American/New Zealand dual citizen, who has lived in New Zealand for the past 40 years. She allowed us to run this on the understanding that we didn't reveal her name or any other personal information about her.

One point she has asked us to mention here is that Americans around the world should ensure that they reach out to the Senate Finance Committee – as she has done, and, as we reported, the Stop Extraterritorial American Taxation organization is also urging them to do as well – by April 7 at the latest, and let them its members know exactly how the U.S. international taxation regime is affecting them", particularly as a result of FATCA and the Tax Cuts and Jobs Act of 2017.

For more information on how to do this, click here.