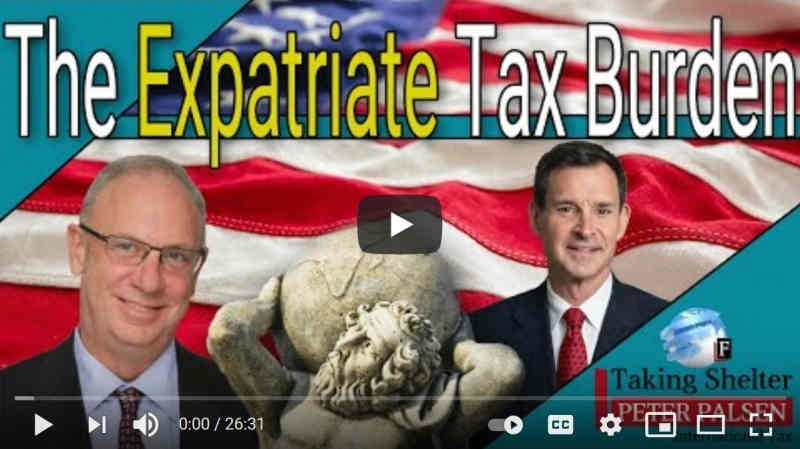 As regular American Expat Financial News Journal readers will already know, Toronto-based American/Canadian lawyer John Richardson, pictured above left, is one of the most visible and outspoken crusaders on behalf of American expatriate issues on the global stage...

When he's not interviewing other experts on U.S. expat tax and citizenship topics for podcasts and webinars (including for this website as well as his own, www.citizenshipsolutions.ca), Richardson can (during normal times) typically be found speaking at industry events in London, Greece or the U.S., often to an audience of ordinary American taxpayers; talking to a Canadian television journalist; or helping Canadian clients figure out whether or not to renounce their U.S. citizenships, and if so, the best way to do it.

Recently, another cross-border specialist – Annapolis, Maryland-based Frost Law's Peter Palsen (pictured above right) – who is also something of a podcast-interviewer himself, for a new Frost Tax Law series called Taking Shelter, turned the interviewing tables on Richardson.

Below, some excerpts from their discussion of "The Expatriate Tax Burden," and Richardson's thoughts as to where things stand for Americans resident overseas right now.

"It's a completely different world than it was 20 years ago," Richardon begins, in answer to Palsen's first question, about "what's changed" for Americans who live outside of the U.S. today.

"It wasn't until the Obama administration began what I personally refer to as 'the FBAR fund-raiser', around 2009, that there [began to be] awareness of the reach of U.S. tax rules.

"You can safely say [at that point] that very large numbers of U.S. citizens living outside of the United States were not complying with their taxes. So we have had the [increased] awareness, but we also have had, you know, some substantial changes in the rules.

"You would also know that in the late 1990s, the foreign trust rules in the U.S. were rewritten in a way that swept in all kinds of arrangements in other countries."  FATCA, of course, followed in 2010, and the rest is history, at least for American expats.

At the same time that the individual American expat tax regime was becaming increasingly complex, Richardson tells Palsen, the IRS began closing down its overseas offices, making it ever harder for Americans resident outside of the U.S. to get help – a problem that remains, and which the recent closure of IRS offices Stateside in response to the Covid pandemic has worsened.

Richardson says he agrees with Palsen that many if not most of the tax and reporting problems expat Americans struggle with are due to the fact that the U.S., unlike every other country on the planet apart from Eritrea, taxes on the basis of citizenship rather than residency.

He says he also believes that this is likely to change one day... though probably "not soon enough to save the people who are currently being destroyed" by CBT (citizenship-based taxation).

"Frankly, I do agree with the camp who see this as a human rights violation," Richardson says.

"It's so crazy, so unjust... I mean, it's based on a person's place of birth, in most cases. And people do not choose where they're born."

What's more, Richardson adds, as the recent Senate Finance Committee hearings that have been taking place since March have shown, things seem destined to only get worse for expats, as proposed tax increases and new information reporting rules are brought into effect over the next few months.

"They [the lawmakers testifying in the hearings] think they're talking about corporations, right. And the language is in terms of 'offshoring' – by the way, all Americans abroad live offshore, just for the record, okay. 'Offshoring' and 'corporations'.

"But what they don't talk about is the fact that anytime there's a change in corporate tax rates, or the CFC [Controlled Foreign Corporation] rules, in general, these things are going to have a direct impact on those individuals [overseas] who engage in these kinds of activities.

[Because] a very large number of Americans abroad do run their own very small businesses, be they yoga studios, pizza delivery [companies], accounting practices, through things [structures] that the US does define as a Controlled Foreign Corporation."

Prompted by Palsen to say how Canadian small businesses have already been affected by recent changes to the rules affecting overseas businesses owned by American-citizen owners, Richardson tells the story of a Canadian doctor with American citizenship he knew who, like many doctors in Canada, took advantage some years previously of an option the Canadian government offered them, "in lieu of a pay increase," to "incorporate their practices, which they hadn't [been able to do previously], as a way of basically providing [them with the equivalent of] a private pension", which they wouldn't have had access to otherwise.

At the time of his retirement, the doctor Richardson knew had managed to accumulate, as a result of this program, around C$3million in assets in his small business corporation over a 30-year period, "which was really his pension, and [which] he was going to use for retirement.

"Then the 965 Transition Tax came along," and the retired Canadian doctor was told to hand over around C$575,000 of that amount to the IRS.

"The doctor says, 'where does he get that money?' The answer is, he liquidates the corporation – or in his case, what he did, if you can imagine this, after all these years of working and trying to be financially responsible… I think what he did was to put a mortgage on his home.

"Again, I want to be very, very clear on this. These U.S. tax policies are confiscating the pensions of Americans abroad. No ifs, ands, or buts.

"That's the simple fact of the matter."

Frost Law is based in the Washington, DC area, and has six offices in Maryland, two in Virginia, one in the District of Columbia, and four in Florida. It was founded and headed up by Glen Frost, who, as reported,  was named president last year of the American Citizens Abroad Global Foundation, the sister educational and research organization to the American Citizens Abroad.

More in this category: « Bright!Tax's Allyson Lindsey: What, if anything, can be done about those IRS delays, late refunds, unanswered calls... A Reader asks: ‘I live in Senegal. My third stimulus payment arrived as a check! How can I cash it here?’ »