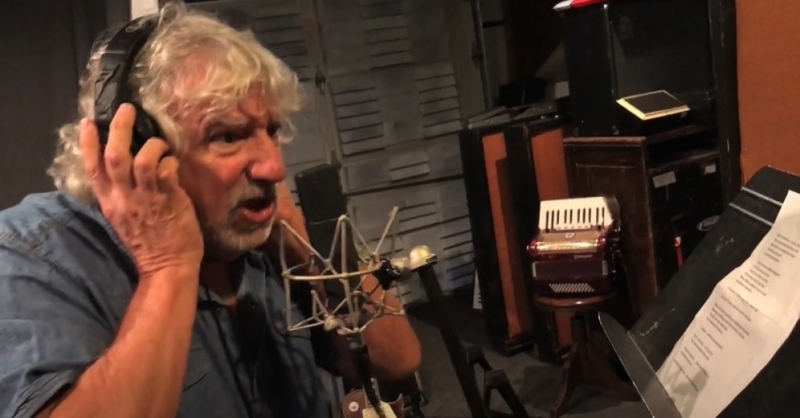 Originally from Charlotte, North Carolina, Carlton Moody – pictured singing the song, above, in his YouTube video of the piece – has lived on the outskirts of Paris, France, since 1992, and before that, regularly performed with his family, beginning when he was still a child.

He says he came to write the song after attending several meetings of the Association of Accidental Americans in Paris with a close family friend who lives near him and his wife, Margaret, and who struggles with her recent discovery that she's an "accidental."

"She's in her seventies, and has lived in France all her life, except for the month just after she was born," Moody, 65, told the American Expat Financial Journal recently, in a telephone interview, referring to this friend.

Moody still speaks with a thick southern drawl, which is irresistibly familiar to other American expats with a Southern or Southwestern heritage, and which lends the songs he sings an unmistakably authentic twang.

"Her mother was French and her father was British, but they happened to be in Atlanta, Georgia, when she was born. Her father was in the British Air Force, and for some reason he apparently had to be there at that time.

"They came back to France after that, and she never lived anywhere else.

"After we'd been to a few AAA meetings, she asked me if I'd be interested in putting some thoughts together, in the form of a song, and it basically came together pretty quickly, thinking about it.

"At those meetings, I started to realize how many people all over the world had been affected by [having been born in the U.S. and raised elsewhere as citizens of other countries], and I thought 'Man, this is kind of weird, you know!'"

At some point in her teen-age years, Margaret Moody said, their friend had been told by the U.S. that she couldn't have dual citizenship, and that she therefore needed to choose which nationality she wished to keep. She says she clearly remembers signing a document at the U.S. Consulate in Paris stating that she officially chose to be French, and not American.

"But now they say they have no record of this," Margaret Moody says her and her husband's friend has told them.

The question as to whether that document still existed came up recently when the Moodys' friend, whom they prefer not to name, began to get messages from the U.S. Internal Revenue Service, saying that because she was American she needed to pay U.S. taxes.

Moody admits that he realized fairly early on that what he'd seen at those AAA meetings, and heard in conversations with his and his wife's accidental American friend, had  the makings of a true American protest song – of the kind such singers as Pete Seeger, Woody Guthrie, Bob Dylan and others have composed over the years, often to an appreciative reception.

"And John Prine, he was a great songwriter, he did songs about coal mines in Kentucky and stuff, always with a little twist," Moody says.

"Also Rambling Jack Elliot, who I had a chance to work with back in the early 1990s."

Moody says "Accidental Americans" only took him "a couple of hours" to write.  He first began to perform it, live, with his son and other musicians, in 2018. 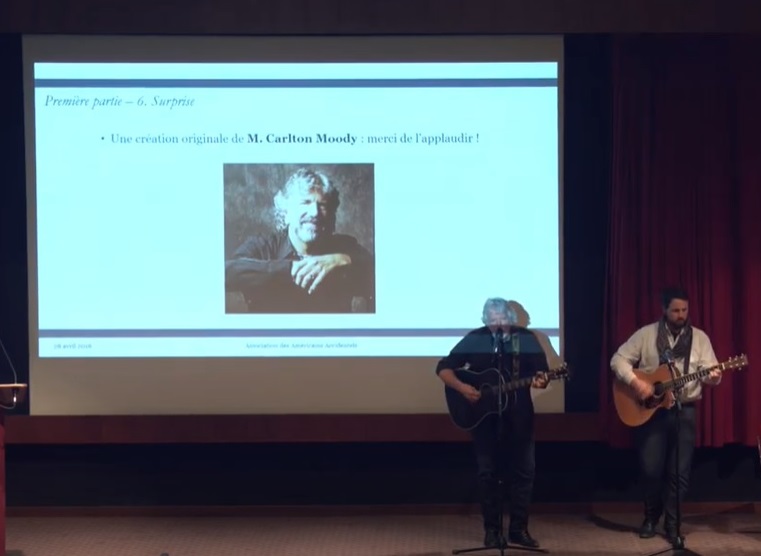 Since then, it's made the rounds of events held by certain American expat organizations, including "some of the fund-raisers the Association of Accidental Americans have done," Moody says, including the AAA's General Asssembly in Paris in 2018 (pictured left, showing Carlton Moody, left, with his son, Jackson).

Moody says he'd be happy to do other gigs for groups of accidental Americans – or other groups of ordinary expats who happen to like country music, an audience he's been performing for almost 30 years, and not just in or around Paris.

Though he says he hasn't performed in such other cities as London "for a while," owing to the Covid-19 pandemic, which, at least until recently, shut down the music venues he and his fellow musicians were accustomed to playing at for more than a year.

He has, though, been performing a bit in Paris, as recently as last night (July 3), when he accompanied Jean-Jacques Milteau, a well-known French blues/harmonica player, singer, and songwriter, in the last in a series of gigs at Paris's Sunset/Sunside jazz club. The lockdown period also saw him working with Milteau on Milteau's latest album, just released, called Lost Highway. (A "teaser video" of Moody and Milteau may be viewed by clicking here). 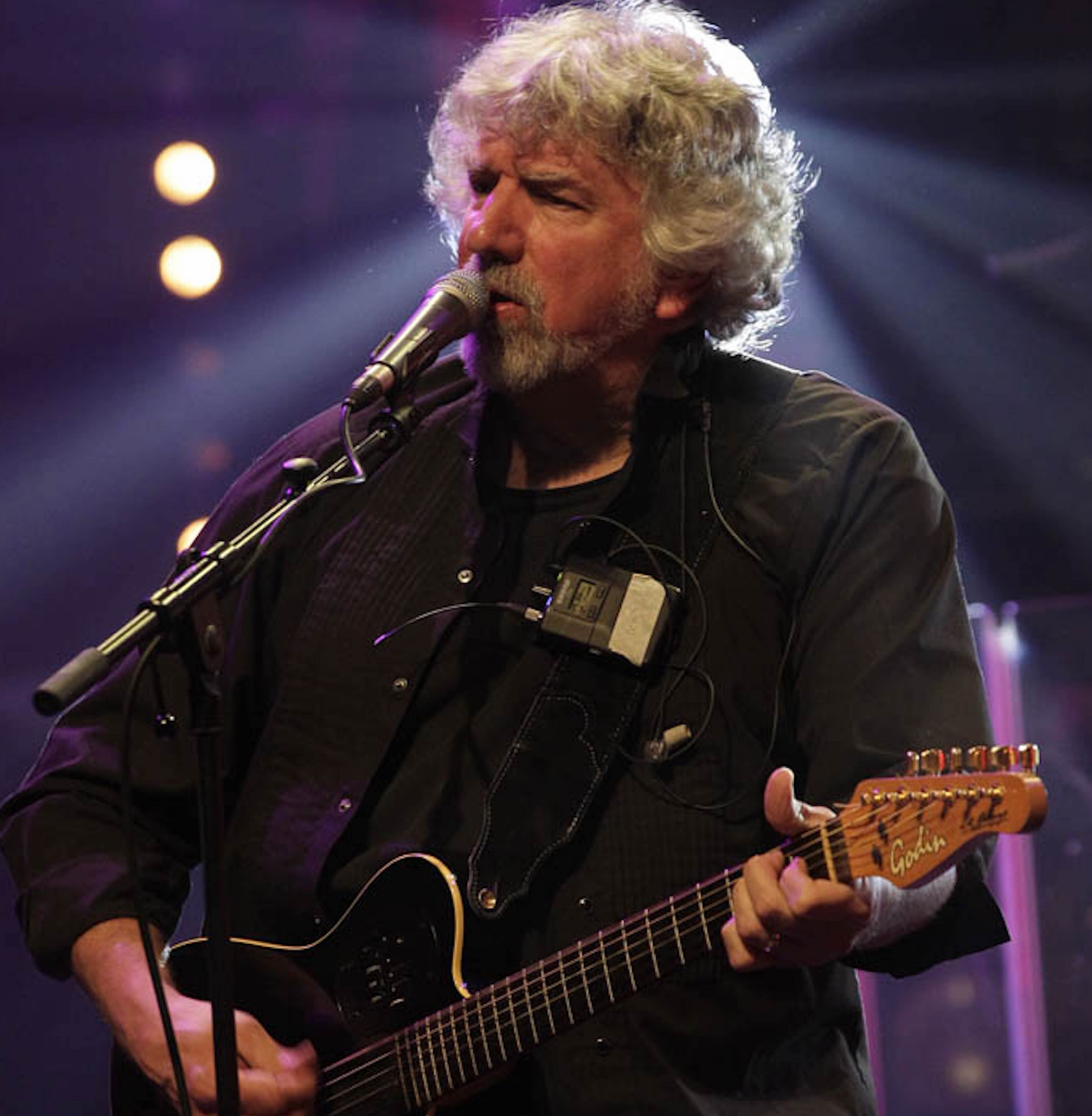 Moody was born into a musical family, not unlike (in its own way), say, the Cowsills, Jackson Five, von Trapp family or even television's Partridge family – if a bit more on the country/blue grass scale than the pop music side.

"Both my mother and father were musicians, in fact they met when they were both playing in my mother's brother's band, back in the late 1940s," he says.

"They used to play pretty much all over the East Coast. And, of course, all of my uncles, pretty much, played music. So the whole music thing growing up was a family thing, from the time I was about 9 years old. Anytime we'd get together, everybody was playing music of some sort.

"My father started putting records out in the 1960s; he had a TV show for a lot of years in Charlotte, and eventually he opened up a music store. So music was pretty much the family business.

Both of my brothers, who are younger than me, also played instruments, and at some point, we recorded several albums, as 'the Moody Brothers' – not to be confused with the Moody Blues, I should probably add.

"The song we're probably best known for is a musical number, ‘Cotton-Eyed Joe,’ which we received a Grammy Award nomination for in 1985, in the 'Best Country Instrumental" category. We were nominated again in 1988, in the same category, for our 'Great Train Song Medley' recording."

Moody says he ended up living in the greater Paris area after working in the mid-1980s with an American singer whose manager was based in London.

"Our agent got a call from Disney in Florida in 1991, wanting to know if we brothers – the three of us – would be willing to come to Europe for one year, and open up the about-to-open Disneyland Paris's Wild West show, a musical event.

"We had to commit to stay there for a year, and also to record some of the music.

"We said yes, because we'd worked in Europe before, and felt comfortable with the idea.

"And like I said, I've been here ever since, apart from occasional periods when I've gone back.

"One of my brothers probably stayed seven or eight years, the other went back after around three.

"After the first maybe 10 or 12 years, I pretty much stopped working for Disney full time, though I still do contract stuff whenever they need someone."

In Disneyland, the Moody Brothers were a headline act at what's known as Billy Bob's Country Western Saloon, a Tex-Mex bar in the Disney Village area of the Disneyland Paris resort.

Most recently, in addition to working with Milteau, Moody says he's recorded a solo album, released last year, called Carlton Moody Honky Tonk Country (a number of songs from which may be found on YouTube).

"Accidental Americans" may have been Carlton Moody's first "protest song" to make it to YouTube and a wider audience, but he doesn't rule out the possibility there could be others.

"Over the last several years, I've actually written quite a few songs [inspired by] political events, and with a political edge to them," he says.

"Sometimes, it's hard not to."

The words to the song are below. His most recent album is on Amazon, where it may be viewed by clicking here. 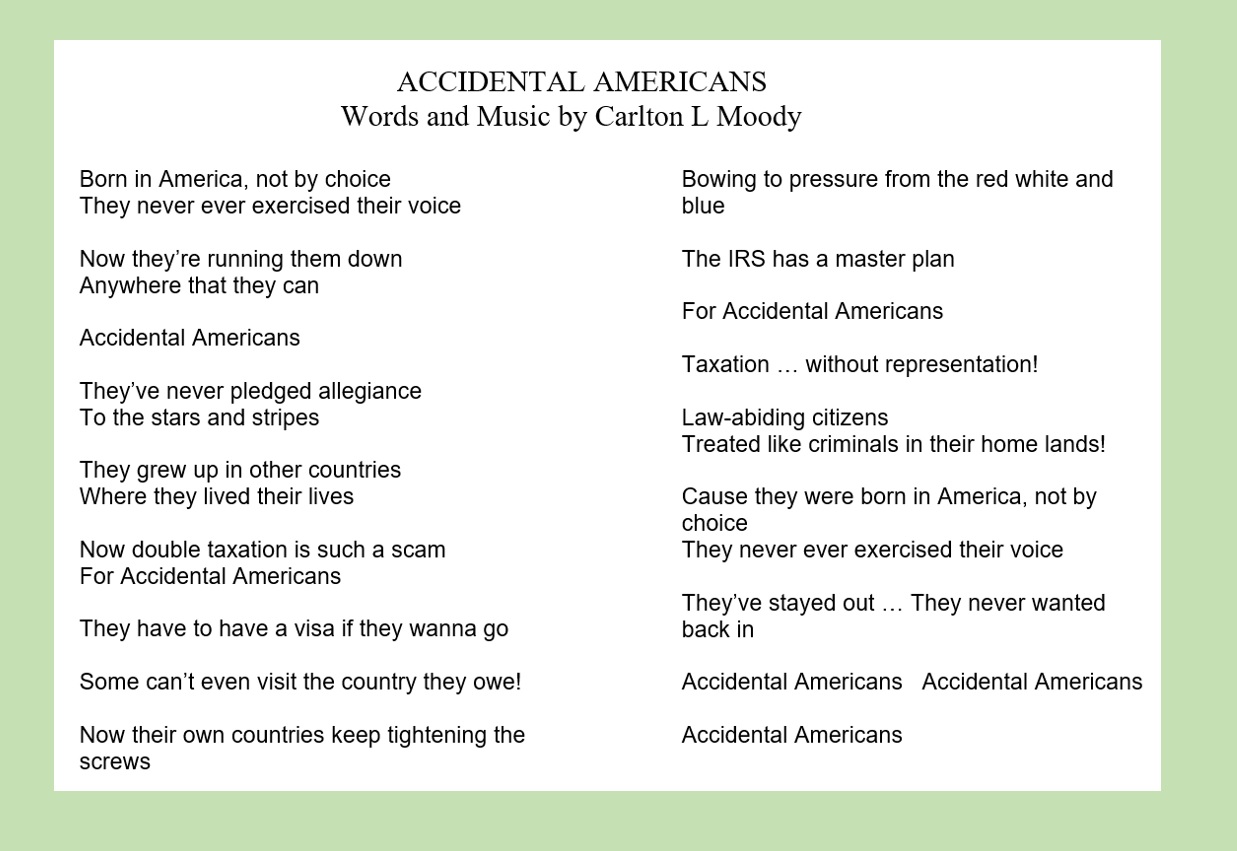 More in this category: « What Americans selling their homes in the UK need to know about cap gains tax (which they must pay) OPINION: The SEAT approach to residence-based taxation: 'Begin with the end in mind' »