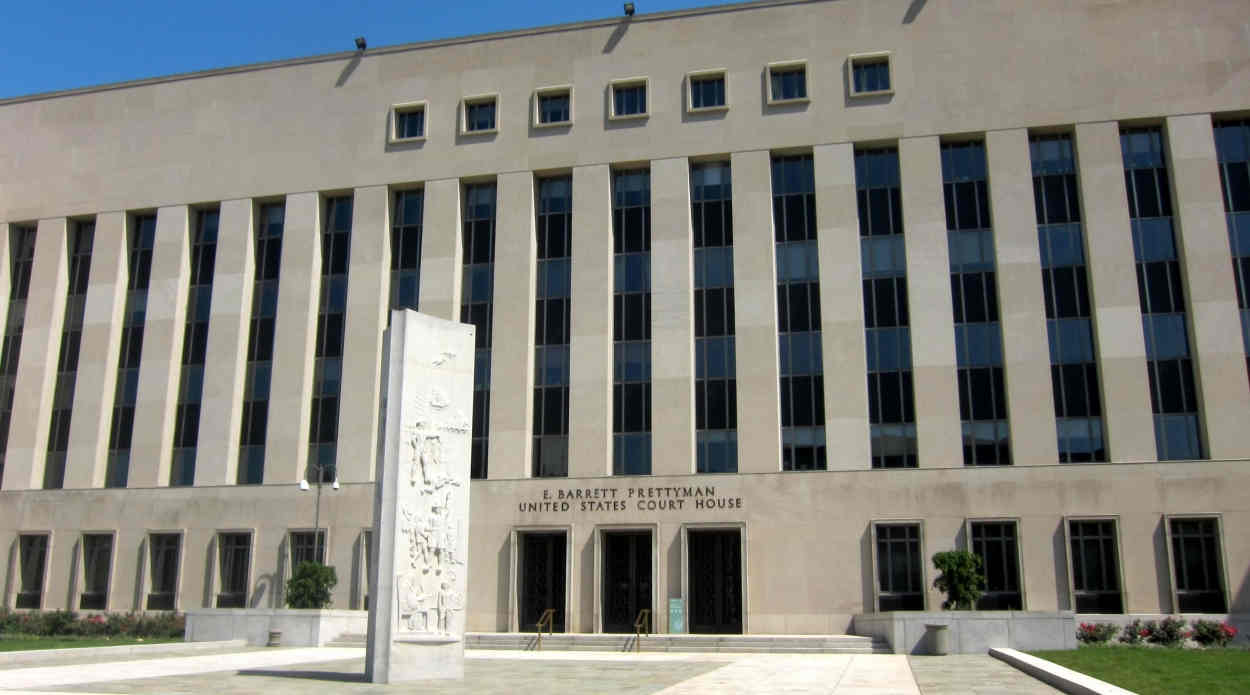 The Internal Revenue Service has moved to dismiss a lawsuit brought five months ago by Israel-based U.S. tax attorney Monte Silver – which challenged a key component of President Trump's December 2017 tax reform legislation as it applies to controlled foreign corporations – on grounds that Silver and his fellow plaintiffs in the matter "lacked standing."

In a court document published on Monday in connection with the case, brought earlier this year in U.S. District Court in the District of Columbia (pictured above), the IRS argues that "the court should dismiss" Silver's complaint because it did "not contain plausible allegations of a concrete injury, causation or redressibility."

"Moreover, while plaintiffs steadily disparage the complexity of those regulations, they concede that the underlying tax statutes, Sections 965, 962 and 951 of the Internal Revenue Code, are themselves highly complex," the IRS continues, in its 16-page deposition.

"Indeed, from the [complaint], it appears that any burden on the plaintiffs may be an unavoidable consquence of the statutes.

"Accordingly, plaintiffs fail to show how relief from the regulations, if granted, would lessen the burden of which they complain."

"As a result, the United States asks the court to dismiss plaintiffs' claims for lack of subject matter jurisdiction."

Silver declined the American Expat Financial News Journal's request for a comment today, saying his immediate priority was to respond to the IRS's motion.

However, other legal experts said the IRS's response was unsurprising.

“It’s a routine and predictable response,” said John Richardson, a Toronto-based lawyer who also serves as co-chair of the Allliance For Defence of Canadian Sovereignty – an organization which recently challenged in Canadian courts the legality of Canada's intergovernmental agreement with the U.S., which enables the U.S. to enforce its Foreign Account Tax Compliance Act.

Richardson said he saw the IRS’s motion to dismiss Silver's lawsuit as an obvious, if potentially effective, effort to sidestep the business of having to actually “argue the merits of Mr. Silver’s case.”

“Of course, what the government is really saying here is that it cannot be sued in the context of a tax case – which is potentially extremely troubling, and has consequences that extend beyond the Section 965 transition tax issue.”

Richard Cassells, a partner with the London-based private client specialist Withers law firm, said he thought the “best hope” for a change in the Transition Tax regulations “probably lies with Congress rather than the courts,” which he said were likely to “find it hard to do anything” in the way that Silver and his co-plaintiffs would want.

Added another legal expert familiar with the case, who requested anonymity: "[Even if Silver] wins, where would we be -- the statutory provisions will not be repealed. The Treasury Department can make another run at the regulations.

"In the meantime, no one, or almost no one, is going to assume that the regulations will be vaporized, as in the first scene of a Mission Impossible episode."

Challenging as the battle ahead may be, Silver and his associates may take some encouragement  in the support their efforts evidently enjoy, to judge by the positive and grateful comments of numerous American expats on Twitter and in American expat Facebook groups, where Silver's efforts are widely praised.

Silver's main argument in the case, as reported here in February, is that the Transition Tax regulations, contained in Trump's Tax Cuts and Jobs Act, failed to contain a "regulatory flexibility analysis" that is required by legislation known as the Regulatory Flexibility Act, a U.S. law that requires federal agencies to review regulations for their impact on small businesses.

Sometimes referred to as the Repatriation Tax, the Transition Tax is said to hit individual owners of small businesses and partnerships located outside of the U.S. particularly hard, because many of them had been counting on their set-aside corporate profits to either expand their businesses in the short term, or to rely on later in life to fund their retirements.

Designed to go after large multi-national companies owned by Americans that had been seen to have held corporate profits overseas for decades to avoid paying U.S. tax on them, the new regulations impose a one-off tax on previously-untaxed foreign earnings dating back to 1986.

"Rather than attempt to find potential solutions for small businesses with regard to the TCJA as required by law, Defendants [the IRS, the Treasury, IRS commissioner Charles Rettig and Treasury secretary Steven Mnuchin] issued impenetrable regulations on or about January 15, 2019 that impose many unreasonably complicated burdens upon a vast number of small businesses and small business owners" like the plaintiff, Silver argued, in his 19-page court document, dated January 30.

He also maintains that the final draft of the TCJA imposes "many unreasonably complicated burdens” on small businesses, and that the defendants had "made no effort to examine the helpless situation of small business, and did not attempt to address alternatives which would allow small business to comply with the law without undue burden."

In his filing Silver notes that the government argued that it didn't have to abide by the Regulatory Flexibility Act in the case of this legislation because it claimed the proposed regulations "would not have a 'significant economic impact on a substantial number of small entities," even though the Treasury had "recognized the burdens of small business compliance" two months earlier, and didn't offer "any factual support [of this claim] as required by law."

His lawsuit asks the court for a number of remedies, including the deferment of the legislation until the issues he has raised have been dealt with properly.

Representing Silver in the matter is Stuart J. Bassin of The Bassin Law Firm, a Washington, DC-based legal practice.

More in this category: « Monte Silver: TCJA still a major problem, but some progress seen in recent GILTI revisions 'Accidentels' reel but vow to fight on, as France's Conseil d'Etat rules in support of current FATCA regime »