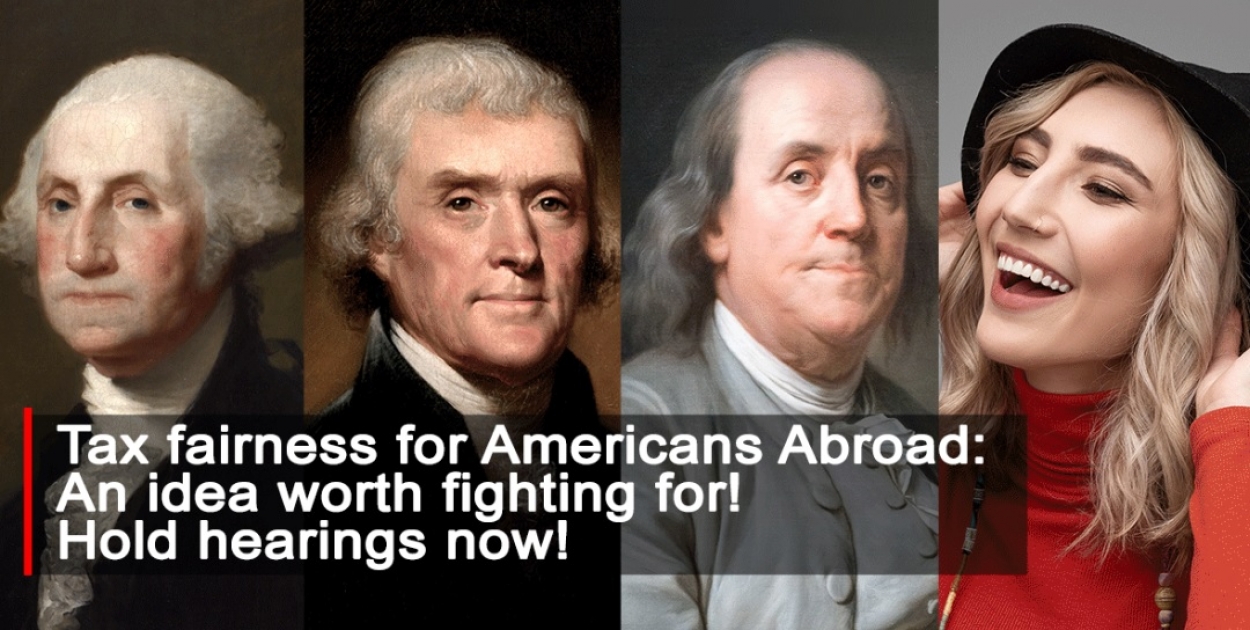 The online write-in campaign, entitled "Tax Fairness for Americans Abroad: An Idea Worth Fighting For!", is needed because hearings need to be held, the ACA explains, "so that the US House Ways & Means Committee can hear about the wide range of tax compliance issues facing the overseas Americans community from stakeholders and citizens."

"With knowledge from hearings, the tax-writing committees and legislators will start to look at specifics of the legislation for refinement," the ACA continues, in a statement issued on Thursday as part of its official launch of the new campaign.

"Treatment of items like Social Security income, income associated with the new “transition tax” and GILTI, and different types of PFIC income, will need more consideration, and details will need to be worked out to determine how these income streams will be taxed under a new residency-based regime.

"Legislation cannot be passed unless Congress has a full understanding of the issues.

"The more voices calling for hearings the better our chances of getting legislation passed in Congress."

ACA's references to the "Tax Fairness for Americans Abroad Act" come more than four months after North Carolina Republican Representative George Holding was last quoted as saying that he needed a Democrat to co-sponsor his bill, which, as reported, he first introduced last December in the final hours of the 2018 legislative session.

Although a number of names of possible co-sponsors have been mentioned, thus far none are known to have agreed to support the bill. The bill therefore has not yet been re-introduced yet this year.

Among the central features of Holding's bill, HR 7358, is an option for American citizens who are living abroad to elect to be taxed on the basis of their residency, rather than their citizenship.

The U.S. is the only country besides Eritrea that taxes on the basis of citizenship rather than residency, and this fact is seen as being at the root of many of the problems expat Americans struggle with, particularly those who have lived abroad for most of their lives and therefore don't have links to the U.S., often don't speak English, and don't consider themselves to be American.

In announcing the online campaign, the ACA, which is a non-partisan, non-profit organization based in the Greater Washington, D.C. area, noted that it has long advocated in favor of a residency-based taxation regime, and beginning in 2016, developed a side-by side comparative showing how and where changes needed to be made to the current citizenship-based taxation regime to make it residency-based.

"All of this work and data helped Congressman Holding’s office and the relevant tax-writing staffs on Capitol Hill on development of the [Tax Fairness for Americans Abroad] legislation,"  the ACA statement continues, adding that the organization "maintains close relationships with the tax-writing committees, Joint Committee on Taxation (JCT), Senate Finance Committee and House Ways & Means Committee.

"We meet regularly with the tax-writing committees, legislators and directly with Congressman Holding’s office to maintain and build momentum."

To read more about the ACA's new campaign, and view a one-minute video, click here.

To "join" the  "Tax Fairness for Americans Abroad: An Idea Worth Fighting For!" campaign, click here.