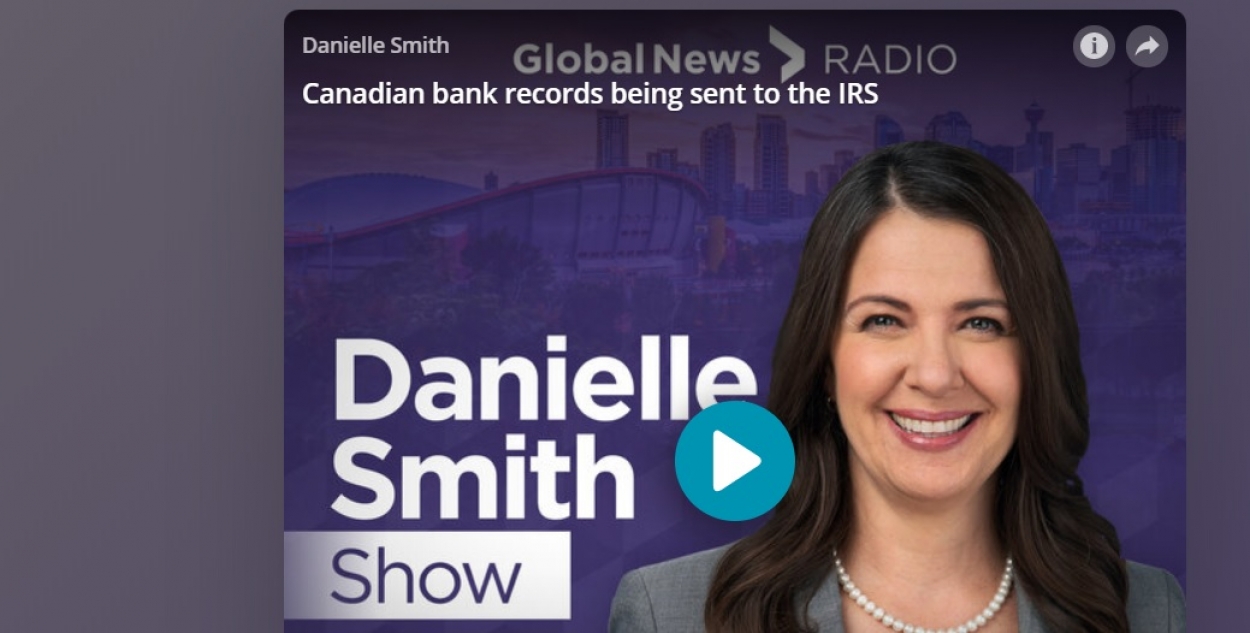 In an appearance on a well-known Canadian radio talk show on Friday, Toronto lawyer John Richardson explained how U.S. regulations that require Canadian (and other non-U.S.) banks and financial institutions to report to the Internal Revenue Service on their American account holders work, and described them as "incredibly intrusive".

Richardson, pictured left, is also co-chair of the Alliance for the Defence of Canadian Sovereignty, which is currently involved in a legal challenge  to the law requiring non-U.S. financial institutions to report on their American clients' holdings, known as the Foreign Account Tax Compliance Act (FATCA).

Interviewing him was Global News Radio CHQR talk show hostess Danielle Smith, pictured above, who is based in Calgary, Canada, and who is well known in Canada not only as a talk show hostess but as a former Legislative Assembly member for the Wildrose Party between 2009 and 2015, during which time she was, for two years, officially leader of the opposition.

The focus of Smith's questions was news, published a few days before the interview by CBC News and other media organizations, that the number of American account-holders' banking records being shared by Canadian banks with the IRS had risen significantly for the 2018 tax year, and totalled around 900,000.

The banks have been obliged to forward information on such American account-holders  since 2014, in accordance with Foreign Account Tax Compliance Act (FATCA) regulations.

In response to Smith's question about the "huge escalation [in the numbers] in such a short period of time", Richardson said one reason probably had to do with the fact that "the way the law is written, the banks have the discretion to report any [account], regardless of the amount in it – that meets the definition of what the United States is looking for", even though, technically, the banks only have to report on those individuals who have a total minimum of US$50,000 in all of their accounts at any point during the year.

Another factor, Richardson told Smith, was that Canadian banks, like banks in more than 100 countries around the world, began last year to comply with "another automatic information exchange agreement, the Common Reporting Standard (CRS)", an OECD initiative which has no US$50,000 minimum on the accounts it expects banks to report on.

"Once Canada entered into the CRS, what the banks then started doing instead of just enquiring about the FATCA, the 2014 agreement, they started asking more questions," Richardson said.

"What [then] happened, I believe, is that a lot of people with lower-value accounts, who were never identified [as being Americans with Canadian bank accounts] the first time around, were sucked into this [FATCA reporting]."

This, he added, was evidence of the "extent of the problem here, and the extent of the absolute outrageousness".

Richardson then goes on to detail how certain "things that are not taxed in Canada", such as the capital gain on the sale of one's "principal residence", are taxed by the U.S., with the result that American dual citzens resident north of the border are obliged to pay what the U.S. regards as its rightful tax on the sale to Uncle Sam.

To listen to Smith's interview of Richardson in full, click here.

Under the Foreign Account Tax Compliance Act, banks around the world are obliged to report to the IRS, via the governments in the countries in which they operate, on the bank accounts of all their American clients above a certain size.

The controversial law was brought in by President Obama in 2010, with the aim of discouraging mainly Homeland Americans from using offshore accounts to hide their wealth from their U.S. tax obligations.

As this and other publications have consistently reported, it has made life difficult for many so-called accidental Americans and others who have lived most of their lives outside of the U.S., as citizens and taxpayers of other countries, but who are now being expected to file U.S. tax returns every year, and sometimes pay tax.

As reported here last month, two dual Canadian/U.S. citizen plaintiffs in a long-running legal effort to block Canada’s implementation of FATCA are going ahead with an appeal in Canadian Federal Court in Ottawa, after their most recent attempt to challenge the law was dismissed in July. It is this on-going case that the  Alliance for the Defence of Canadian Sovereignty – Richardson's group – has been supporting.

In March, the American Expat Financial News Journal exclusively reported that UK officials had twice turned down a Freedom of Information request filed by a U.S. born British citizen who was interested in knowing the “extent of…the annual disclosure of British taxpayer information to the US Internal Revenue Service, as per FATCA’s requirements" – even though similar requests to the Canadian and Australian governments had recently been granted.

Last year, Australian media reported that a freedom of information request had revealed that Australia had provided the IRS with details of A$184bn held in about 862,339 Australian bank accounts by U.S. citizens living in Australia. The FOI had been submitted to the Australian Tax Office by an Australian lobbying group, Fix The Tax Treaty, which is fighting the tax treatment of U.S. citizens living outside of the U.S., The Sydney Morning Herald said last March.

The British citizen behind the UK FOI, who requested anonymity, told the AEFNJ back in March that she had in fact been "inspired" by the Fix The Tax Treaty's efforts to attempt a similar request.