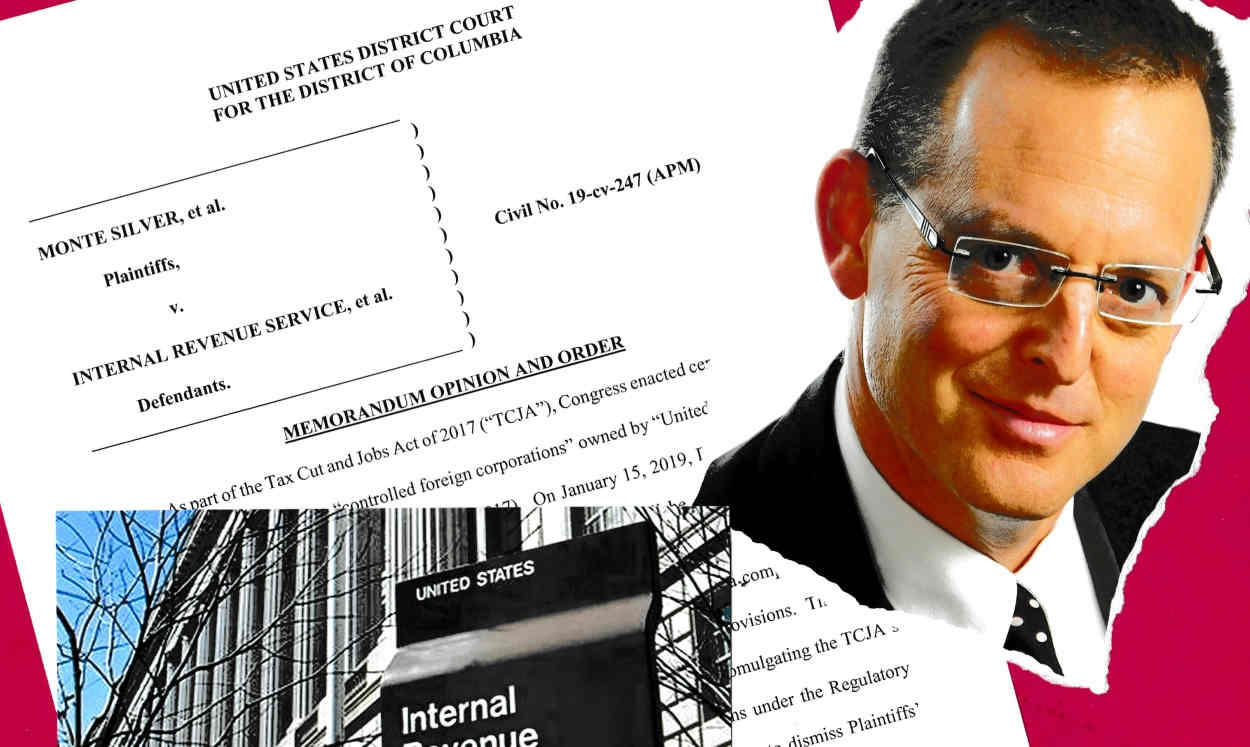 Two days after a U.S. District Court judge in Washington, D.C. ruled that he could go ahead with a legal challenge of a key component of President Trump's December 2017 tax reform legislation, Tel Aviv-headquartered U.S. tax attorney Monte Silver told U.S. Treasury Secretary Steve Mnuchin and other Treasury officials in an email that their case against him had been "clobbered" by the decision.

Details of Silver's email came as Silver also for the first time was able to comment on the Dec.24 ruling, which coincided with a widespread global shutdown in recognition of both the Christmas and Hanukkah holidays.

As reported, the December 24 memorandum opinion and order in Monte Silver and Monte Silver Ltd. v. IRS by District Court Judge Amit P. Mehta has meant that the case may now go ahead, and thus enables Silver to present his arguments for claiming that the so-called Transition Tax elements of Trumps Tax Cuts and Jobs Act are procedurally invalid because the government failed to take into account their effects on small businesses, which it is required to do under the Regulatory Flexibility Act (RFA).

In his opinion, the judge noted that Silver's suit doesn't address directly the collection or assessment of tax per se, and therefore isn't covered by the Anti-Injunction Act. "Plaintiffs do not seek a refund or to impede revenue collection," he wrote.

"Instead, they challenge the IRS's adopting of regulations without conducting statutorily-mandated reviews designed to lessen the regulatory burden on small businesses."

In his Dec. 26 email, to which he attached a copy of the seven-page decision, Silver told Mnuchin and his Treasury Department colleagues that Judge Mehta's ruling "opens the door to a copycat GILTI lawsuit, and countess other RFA [Regulatory Flexiblity Act] actions against Treasury and other agencies".

"Yes, this case will become a seminal administrative law case, and I will own the RFA space and grow it," Silver added, comparing himself to a "Robin Hood defending small U.S.-based businesses and trade associations".

The Government now has just two choices, Silver went on: "Litigation – appeal or my soon-to-come summary judgment motion, both of which are very risky for you; or call my lawyer and commence settlement discussions, which is what I proposed all along."

Silver noted that in addition to being obliged to show that the effects the Transition Tax elements in question would have on small businesses, as required by the RFA, the Treasury and IRS have also been reminded that they need to show compliance as well with the Paperwork Reduction Act, a law that was enacted in 1980 to reduce the paperwork burden imposed by federal agencies on private businesses and citizens.

"Only now, after the ruling, Treasury/IRS has to wonder how it must adjust its processes to comply with [the] RFA and Paperwork Reduction Act compliance."

'The case is practically over'

Silver told the American Expat Financial News Journal that as he sees it, the most "difficult" part of his case is over – and expressed his relief that the judge not only ruled against the IRS in its effort to deprive him and his company the legal standing to bring the case, but that he also "explicitly humiliated" the government in his observation that in its attempt to prove that he and his company "lack[ed] standing" and otherwise were not legally capable of proceeding with it, the IRS "fundamentally misconstrues Plaintiffs’ claims".

"The ruling far exceeded what I expected in many ways," Silver added.

"[In addition to saying the Defendants] lacked a fundamental understanding of the case, the judge cited the Paperwork Reduction Act as a law that the government would have to comply with, in addition to the RFA. This is something very meaningful which he added on his own, and which makes it clear that he is going to be very hard on the government in this case."

Silver said he saw his case as "precedent-setting in at least two ways: One, the first time that the court has allowed a plaintiff to overcome the Anti-Injunction Act (AIA) and challenge a Treasury regulation – not one single expert I spoke to before filing the case thought I could overcome [this]; and two, it's the first time the RFA has been used to challenge a regulation of a key federal agency."

Silver said his next step is to file for a "summary judgment" in the matter, which in effect means he would be asking the judge to find in favor of his and his company's claim in the matter now, without needing to go to trial to prove their case.

Separately, in a posting on his American Small Businesses for Tax Fairness Facebook page, Silver revealed tentative plans for "three possible road trips" in February/March, to the Americas, Europe and Australasia, for advocacy-related issues.

"Happy to get your feedback on this, and if you have a potential interest in being a local organizer," Silver added, in his message to the Facebook group's 242 members.

Transition Tax part of the TCJA

The Transition Tax, sometimes referred to as the Section 965 or "Repatriation Tax" element of the Tax Cuts and Jobs Act, came into force along with the other elements of President Trump's overhaul on Jan. 1, 2018. It has been widely criticized from its introduction for what critics have said is its failure to take into account its potentially harmful effects on Americans living and working overseas, and the businesses that many of them own and and have owned and run for years.

In October 2018, the American Citizens Abroad told an IRS and Treasury Department hearing that in drafting the TCJA, the Treasury had failed to do its due diligence in determining how it would affect small entities, such as the many small businesses owned around the world by American expats, and mentioned in particular the Regulatory Flexibility Act, which is at the heart of Silver's lawsuit.

Because Silver is a U.S. citizen, his Israeli law firm is considered under U.S. tax law to be a “controlled foreign corporation” (CFC), and therefore, as a result of the TCJA, potentially subject to such new and onerous taxes as a one-time tax on the company's deferred income accumulated after 1986.