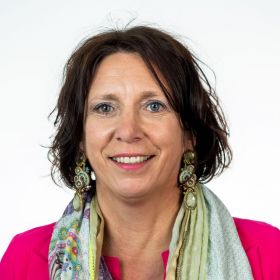 Hoekstra's response, dated Oct. 6 (last week), and available online on the Dutch government’s website, was in answer to  questions submitted to him last month by Helma Lodders, pictured left, of the People’s Party for Freedom and Democracy.

She and other Dutch MPs have been asking questions for months about various problems that so-called "accidental Americans" in the Netherlands have been having since the beginning of 2020, as Dutch banks began to enforce a new element of the U.S. Foreign Account Tax Compliance Act law (FATCA) that is obliging  them to begin providing the U.S. with the U.S. Tax Identification Numbers (TINs, usually a person's Social Security number) of all their clients who are either considered to be American citizens or Green Card holders.

Until this year, this requirement wasn't mandatory.

Under the U.S.'s citizenship-based tax regime, anyone born in the U.S. is considered to be an American, even if they left the day after they were born, and thus must file a U.S. tax return for the rest of their life – unless they renounce their citizenship, itself a costly and complicated process – if their income is above a certain amount; some individuals born abroad to American parents are also considered to be American.

Such individuals are often called "accidental Americans", although the term isn't always popular among those to whom it refers.

Towards the end of last year, a number of European lawmakers and even a new answer on an Internal Revenue Service "frequently-asked questions" page stressed that non-U.S. banks don't need to worry about the U.S. taking action against them for now. Nevertheless, in certain countries, including the Netherlands, the banking industry has decided to err on the side of caution – with the result that growing numbers of the estimated 46,000-plus Dutch accidentals have reported having had their bank accounts closed, or say they've been told that they will have if they don't obtain a TIN.

(Europe-wide there are estimated to be more than 300,000 "accidentals", and some think the number could be even higher.)

Although numerous efforts to address the issue have been attempted, including a meeting in January with Dutch lawmakers (see photo, above), spokespeople for the accidentals say the situation for them has not improved.

Hoekstra seen to
take banks' side

In his responses, which he entitled (in Dutch) “'Answers to parliamentary questions [concerning] KIFID termination of [bank] account if consumer does not want to apply for US TIN or CLN and amendment of Annex II FATCA treaty', Hoekstra appeared to align himself fully on the side of the banks, and seemed to view the claims of Dutch citizens who seek to avoid getting U.S. TINs or Certificates of Loss of [U.S.] Nationality” (CLN) in order to maintain their Dutch bank accounts, mortgages and so on – on grounds that they don't wish to move further in the direction of becoming American citizens than they already are – as unjustified.

(KIFID stands for Klachteninstituut Financiele Dienstverlening, which is the Dutch financial services complaints tribunal service. Recently it answered an accidental's complaint about their bank in a way that the accidental American groups regarded as unsatisfactory, and thus it was mentioned by Lodders in her questions.)

Hoekstra's answers were seen as significantly less accommodating than the responses of Dutch finance secretary Johannes "Hans" Vijlbrief earlier this year, to a similar set of questions.

As reported, Vijlbrief insisted back in March that it would have been "premature for [Dutch] banks to close, block or freeze" the bank accounts of dual Dutch/American clients, at least at that point, just because these clients had failed to provide their Dutch banks with a U.S. TIN.

In addition, Vijlbrief noted that those individuals whose accounts totalled US$50,000 or less didn't need to provide their Dutch bank with a TIN at all.

However, Vijlbrief's answers were, as he explained at that point, mainly based on the fact that it was understood that the U.S. authorities would only take action against banks that failed to comply with the U.S. FATCA regulations "in the summer of 2023 at the earliest", rather than because of any conviction that Dutch banks should not have to provide the U.S. authorities with the TINs of their American citizen clients at all.

Meanwhile, thus far, the U.S., it should be noted, has stopped short of officially providing any reassurance to banks on the matter of those of their clients who lack TINs.

"I can't tell you how frustrating all of this is," said Jet Barendregt, a spokesperson for the Netherlands Association of Accidental Americans (NLAA), adding that further answers of a similarly unwelcome nature to accidentals' questions had also been published, on Tuesday, by Justice Minister Sander Dekker, which pointed to the fact that a number of recent European Court of Justice (ECJ) decisions concerning data protection have pointed to the fact that the EU may need to revisit alleged data protection issues having to do with FATCA.

"He (Dekker) stated that the IGA [intergovernmental agreement between the U.S. and Dutch governments that sets out the way FATCA is enforced by the Netherlands] and our tax treaty with the U.S. is in compliance with the European General Data Protection Regulations... I mean, really?!"

The NLAA today sent an impassioned letter to five Dutch politicians, including Lodders, who have expressed support for the accidentals' cause in the past, asking what had happened to "the plans we discussed at the special hearing on Jan. 22 of this year".

"You showed understanding, and we were willing to look for a solution," the letter, which is also being sent to the mainstream media in the Netherlands, continues.

"We had confidence in our Parliament again.

"But now, 10 months later, the battle over the problems of the accidental Americans is intensifying, now that KIFID has also gotten behind the [government's] benches.

"Even statements by the ECJ about GDPR rules with regard to privacy – not only the Schrems II case, but more recently also the tax-related statements in two Luxembourg cases – are dismissed by the ministry as 'unimportant'."

The letter goes on to explain that for those who lose their bank accounts, this means "no income, no pension, no social assistance, no mortgage, being unable to pay one's bills or to shop", with the further consequences being that people "are evicted from their homes; no longer insured; are cut off from electricity, gas and water, and married couples have to get divorced, so as not to such their partners into these financial troubles.

"Do we have to wait for these examples to make it into the news before someone understands, and intervenes?

"We are not tax evaders, and this is a great injustice!"

Also exasperated by Finance Minister Hoekstra's latest letter, and other recent developments, is Daan Durlacher, himself an accidental even though he was born in the Netherlands (to an American mother), and has never lived in the U.S.

“If I read the finance minister’s answers to the questions put to him by the Dutch Parliamentarians correctly, we have made no progress in six years of trying to educate this government about our predicament,” said Durlacher, who founded and runs an entity called Americans Overseas, which helps Dutch citizens and others with their U.S. citizenship and tax issues, and also helps them to become tax compliant, in some cases on a fee-paying basis.

Durlacher added: "The minister is turning the problems these people are having into an endless circle. But it is now time to act, and find solutions.

"We understand that it has become, legally and politically, a complex situation, now that the FATCA rules are beginning to be implemented more strictly by the banks.

"But this is a result of the same government that was not paying attention to the large number of coincidental, U.S.-born Dutch citizens at the time that they agreed – with the best of attentions – to help the U.S. find Americans who were hiding money abroad, by signing up to FATCA."

Durlacher said his organization has a "full-time team working day in, day out" to provide answers to the large numbers of Dutch citizens whose Dutch and German bank accounts are increasingly being affected by FATCA, and who aren't getting the correct or complete information they need from these institutions.

*  Although European law requires EU banks to provide all EU citizens with basic bank accounts if requested, under Dutch law, banks in the Netherlands are entitled to close the bank accounts of anyone they suspect of tax evasion, fraud and/or terrorism. (Spokespeople for the accidental Americans say the banks are making use of this law even though they don't have genuine cause to suspect their accidental American account-holders of such crimes.)

*  While it is true that Dutch citizens have a right to a basic bank account, under European regulations, they nevertheless must comply with the FATCA regulations, which call for anyone who is also a U.S. citizen to provide the bank with their Social Security, Taxpayer Identification Number or Certificate of Loss of Nationality

* Asked what he planned to do about the problem of accidental Americans unable to have to keep bank accounts, Hoekstra said he would "continue to talk to the banks about the reasons for the closure and freezing of the accounts of U.S. persons", but that he still believed, as he has said before, that he believed it was a matter for the banks themselves "to determine which customer groups they serve"

*  If a client doesn't agree with their bank's decision to discontinue their services, they should file a complaint against the bank, and then with KIFID. (Accidental American spokespeople say the problem with this is that accidentals don't have the money to stand up to the banks, which hire "expensive ZuidAs attorneys", ZuidAs being an area of Amsterdam where the major law firms tend to have their offices)

* In response to a question as to why the Dutch government doesn't object to the U.S. targeting life-long Dutch citizens with only legacy links or otherwise distant ties to the U.S. for U.S. tax purposes, Hoekstra noted that the U.S. introduced FATCA to Europe in 2014 and has demonstrated a "solution-oriented attitude" to the matter, independent of the obligation for the individuals to provide a U.S. TIN.