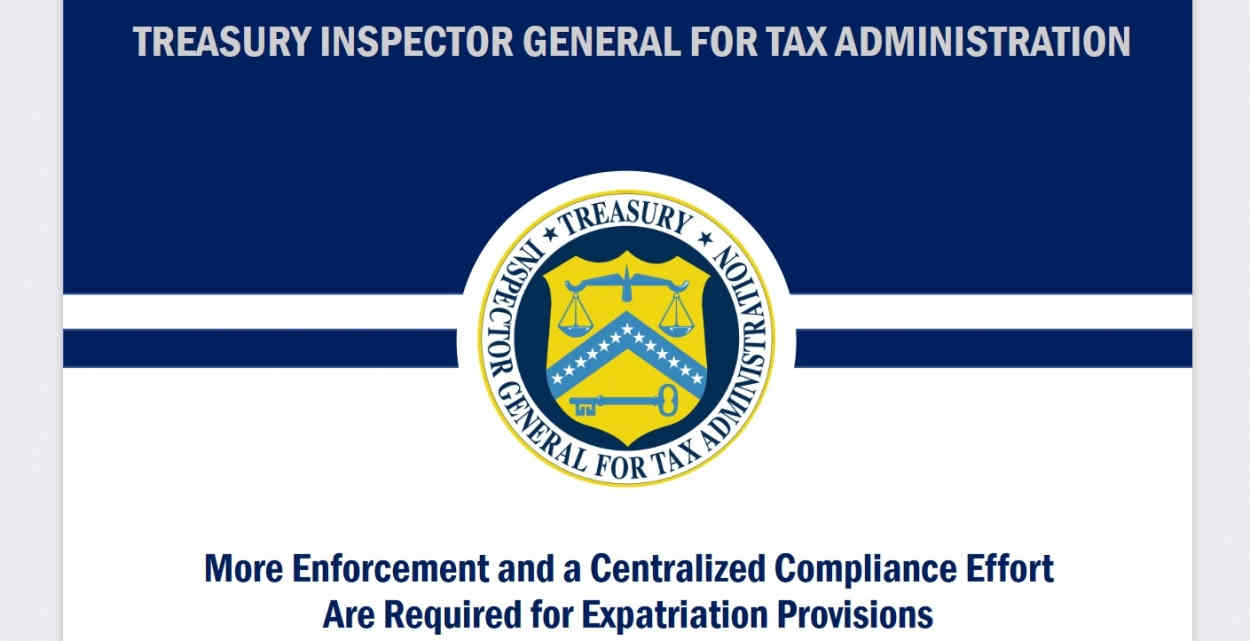 A U.S. Treasury report calling for "more enforcement and a centralized compliance effort" to deal with the large numbers of American citizens who are currently expatriating every year, to ensure that they're all paying the required amount of exit tax as they leave, has been discovered its contents made public by contributors to the Canadian advocacy website for dual Canadian/American citizens, the Isaac Brock Society.

Stephen Kish, a professor at the University of Toronto who renounced his own U.S. citizenship in 2016, followed up an initial Brock posting of a 47-page, Sept. 28 report on the U.S. Treasury's website, the first page of which is pictured above, with the observation that in an ideal world, "expatriation" – the leaving of one's birth country for another, without planning to return – should ideally be "a human right".

Nevertheless, as this U.S. Treasury Inspector General for Tax Administration (TIGTA) document reveals, he went on, in his own Brock website post, the U.S. government in fact aims to "discourage anyone who renounces [their American citizenship] because they [the renouncing Americans] don't want the burden of annually filing those U.S. tax forms" – and for this reason, is set on ensuring that there are "disincentives" in place to make it harder for such persons to go through with their plans.

Kish goes on to summarize the 47-page TIGTA document as seeking to make "a much better IRS centralized effort", on the grounds that if this isn't done, "Congress's attempts to create disincentives for tax-motivated expatriation, via IRC § S877A, will not be effective". IRC Sections 877 and 877A are the rules that govern the procedures for determining how much of an exit tax an American who has more than a certain amount of assets must pay if they are to be allowed to give up their citizenship.

Writes Kish: "TIGTA found that the IRS database of expatriates was incomplete for 16,798 expatriates who did not file Form 8854 [a basic expatriation document].

"From a sample of 26 expatriates who did not file a Form 8854, five had potential unreported income over US$6 million.

"From a sample of 61 expatriates who filed a Form 8854, 15 had potential unreported income over US$17 million.

"Lastly, TIGTA also found that expatriates with high net worth appear to not be paying their exit tax.”

Asked by the American Expat Financial News Journal to expand on his Isaac Brock Society piece, Kish reiterated his belief that "expatriation, even from the United States, is a human right and should not be made difficult.

"I therefore found extraordinary the TIGTA audit statement confirming that both U.S. Treasury and Congress want disincentives applied to those who wish to abandon their unwanted U.S. citizenship for so-called 'tax-motivated' reasons.

"Because this would include 'accidental Americans' who never wanted in, and just want out painlessly.

"Shame on the United States for wanting to restrict this human right."

To read and download the TIGTA document – which is described as a "Final Audit Report" and which bears the signature of Deputy Inspector General for Audit Michael E. McKenney – click here.

The Isaac Brock Society was begun in 2011 by a handful of Canadian-Americans who were already becoming frustrated by the American government's intensifying efforts to come after them for unpaid taxes and failing to file U.S. tax returns, after the signing into law the year before by President Obama of the Foreign Account Tax Compliance Act.

Kish wasn't among the first "Brockers", but he is the chairperson of the Alliance for the Defence of Canadian Sovereignty, which has been responsible for a legal challenge to FATCA that's been going through the Canadian court system for a number of years.

As reported here last year, it is currently in the hands of the Canadian Federal Court of Appeal.

His flagging up of the TIGTA audit report comes as the Accidental Americans Association is preparing to bring a crowd-funded legal challenge against the U.S. State Department next year, for what it says is the "exorbitant" US$2,350 fee that the U.S. charges those wishing to renounce their U.S. citizenship. The fee, which was hiked from just US$450 in 2010, is widely seen as one of many ways the U.S. seeks to discourage dual citizens from giving up their U.S. passports.

Meanwhile, TaxConnections, a U.S. tax industry news website based in California, also flagged up the TIGTA report this week.

In his article on the report, Zachary Montgomery, an associate attorney at Freeman Law PLLC in Prosper, Texas, said its conclusions suggested to him "that the Internal Revenue Service intends to implement new processes and procedures to ensure future compliance with expatriate tax provisions.

With respect to Kish's observation that being able to give up one's citizenship should ideally be "a human right", meanwhile, some observers have come forward in the wake of his Isaac Brock Society posting to point out that the U.S. is among the countries that have actually signed and ratified a document known as the Universal Declaration of Human Rights, Article 15(2) of which states that "no one shall be arbitrarily deprived of...the right to change his nationality", in addition to other, similar documents.

The topic is also discussed in a YouTube webinar posted by three of the founders of SEAT (Stop Extraterritorial American Taxation), a recently-launched education and advocacy organization: lawyer and Taxpayer Advocacy Panel member Dr. Laura Snyder; Dr. Karen Alpert, the Australia-based founder of the Fix the Australia/US Tax Treaty website (https://fixthetaxtreaty.org/), and a finance lecturer at the University of Queensland; and Toronto-based lawyer John Richardson, who advocates on behalf of the causes of Americans living overseas when he's not helping clients with their U.S. citizenship issues.