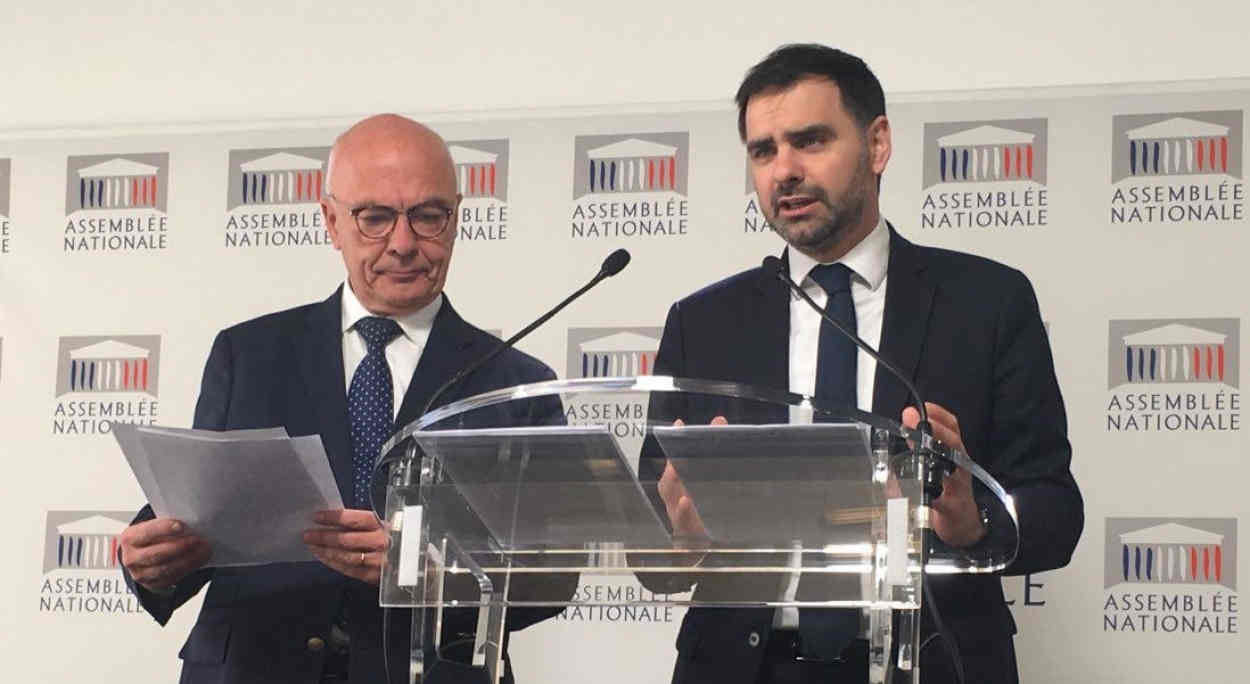 Information about Friday's meeting on the topic was posted on the National Assembly's website a week ago.

According to that posting, the proposed amendment follows on from a report unveiled in Paris on May 15, 2019, by two French asssemblymen, which called on the French government to engage in further negotiations over FATCA, in response to continuing problems they said were resulting from the efforts of French financial institutions to comply with the law.

The two assemblymen – Marc Le Fur and Laurent Saint-Martin, pictured above, at the press conference at which they presented their report 18 months ago – are scheduled to attend tomorrow's meeting.

Tomorrow's National Assemby session will take place just three days after a mostly-virtual European Parliament Petitions Committee hearing on the subject of FATCA was held, and at which, as reported, four MEPs were among those who criticized the European Commission for what they said was its continued failure to address the FATCA-related problems that thousands of American/French and EU dual nationals in particular were said to be struggling with.

In a related development, the Standing Committee on Finance of the Dutch equivalent of the House of Representatives – the Tweede Kamer – is planning to hold a "general consultation" on the subject of "accidental Americans" on Nov. 24, according to a letter seen on Thursday by the American Expat Financial News Journal, which said the date had been announced at a meeting in October. No further details were immediately available.

According to the notice on the French National Assembly's website of tomorrow's planned discussion, the amendment being proposed by Assemblymen Le Fur – who is vice president of the National Assembly – and Saint-Martin, the body's general budget rapporteur, isn't specifically aimed at addressing the problems being experienced in France by so-called "accidental Americans" as a result of FATCA directly. Rather, it seeks to address what is referred to as "the significant asymmetry in the exchange of tax information between the DGFiP and the IRS".

The notice goes on to point out that in their report 18 months ago, Le Fur and Saint-Martin had called for the American administration to be reminded "of its commitment to obtain from Congress, in order to apply the 2013 intergovernmental agreement relating to the Foreign Account Tax Compliance Act (FATCA), the authorization to communicate to the General Directorate of Public Finances (DGFiP, or France's answer to the IRS) the balance of accounts and the surrender value of life insurance policies held by French people in the United States".

Failure to do so, the notice continues, was meant to have resulted in the "[suspension of] the transfer to the Internal Revenue Service (IRS) of this data collected by the French banks".

It adds: "Almost eighteen months after the filing of this report, and while progress regarding the relations of these binationals with French financial institutions and with the American administration remains limited, it is important to draw the attention of the Government in public session [to] the need to intensify its negotiations with the United States on the reciprocal application of the agreement – a requirement laid down by article 55 of the Constitution."

As reported, Le Fur and Saint-Martin's May 2019 report made a number of recommendations in addition to insisting on the reciprocity of the exchange of information, as originally agreed to in 2013.

Their other recommendations included calling on the French government to engage in further negotiations over FATCA, and if necessary abandon it altogether, if it was unable to resolve the "extra-territorial tax" problems that French/American dual citizens struggle with; the creation by the U.S. of a new role of “fiscal attaché,” to be based at the American Embassy in Paris, to give dual American/French nationals someone they could go to with their tax and information-reporting issues; and the extention of a moratorium, since expired, that had exempted European banks from having to report certain personal tax information to the U.S. authorities about their American account holders.

Some FATCA-watchers note that the timing of the National Assembly's proposal comes at a time when the U.S. may be starting to feel pressure from other countries in addition to France over its failure to fully reciprocate an exchange of bank information with those countries around the world that have agreed to FATCA IGAs, now that most of the rest of the world is doing so, under a similar automatic information exchange agreement known as the Common Reporting Standard.

The CRS was developed by the Organisation for Economic Co-operation and Development a few years after FATCA, but borrowed heavily from it in terms of the way it was written and structured, and currently has more than 100 signatory countries.

As long ago as 2018, when the CRS had only been going a few years, the fact that the U.S. had opted not to participate was already beginning to raise eyebrows.

This wasn't just because the U.S. expected other countries to provide it with information about the financial accounts held in these other countries' institutions by its own citizens, while failing, in most cases, to offer the same service in return, but also because its failure to sign up to the CRS meant that it could potentially be a place for citizens of these CRS-signatory countries to hid their wealth.

Fabien Lehagre, founder and president of the Paris-based Accidental Americans Association, said he would be watching tomorrow's meeting with interest.

If Le Fur and Saint-Martin's proposal were to be adopted, it "could have a significant impact, because it aims to block the transfer of information communicated with the United States under the FATCA intergovernmental agreement in the absence of reciprocity on the part of the US administration."

He added: "The fact that the Dutch Finance Committee is taking up the subject a few days later is excellent news, and gives me hope that the French and Dutch governments will be able to act together with the new American administration."