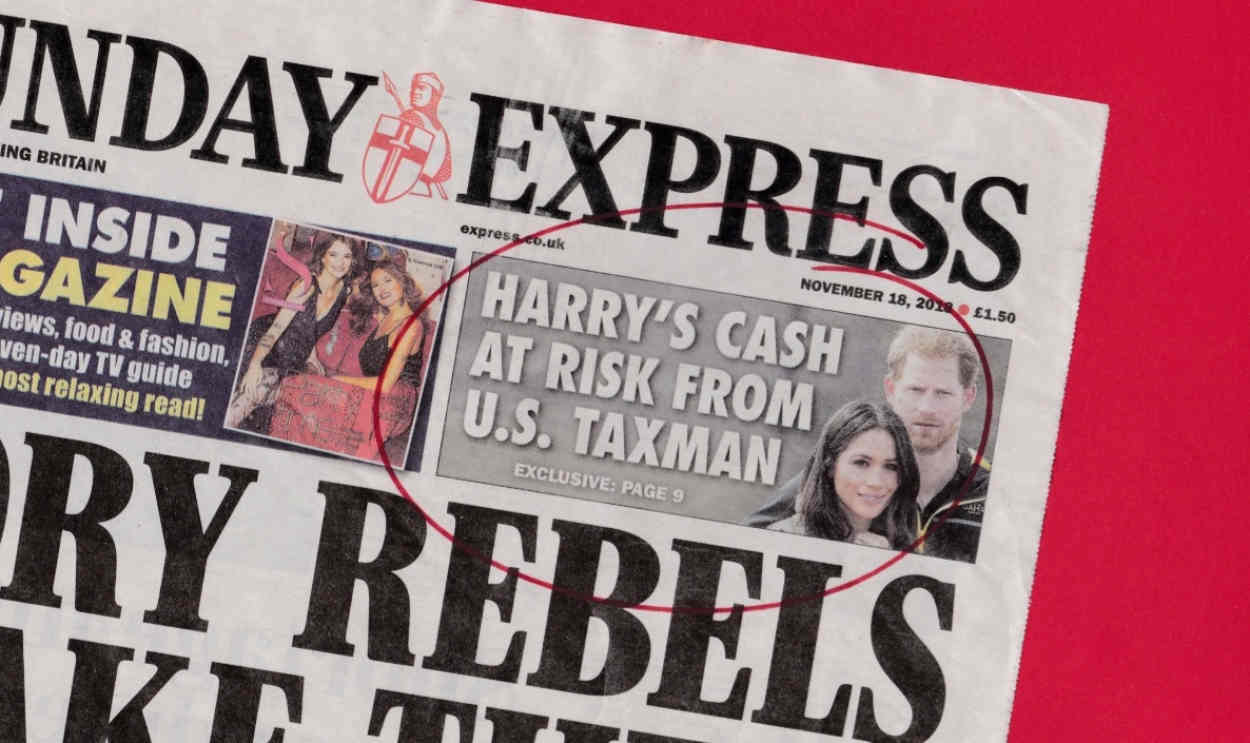 The U.K.'s royal family is looking to recruit "a firm of U.S. financial consultants" to help its in-house aides as they "struggle to deal with the Duchess of Sussex's "American tax 'nightmare'," a U.K. Sunday newspaper is reporting today, in what it says is an exclusive report.

The Sunday Express article also claims that the former Meghan Markle, an American actress who married Prince Harry on May 19, will renounce her U.S. citizenship, which many U.S. expat tax and citizenship experts predicted she would do but which has never been officially announced.

The Sunday Express doesn't name its sources, referring only at one point to an un-named "aide", nor does it say which if any U.S. tax companies are under consideration for the job of assisting the Duke and Duchess of Sussex with their U.S. tax issues.

From the day last November that Buckingham Palace officially announced Prince Harry's intentions of marrying the American, U.S. tax experts have been predicting that the duchess's American citizenship could pose unique tax issues for Buckingham Palace, due to America's recent interest in coming after its expats for tax.

Unlike all other countries except Eritrea, the U.S. taxes on the basis of citizenship rather than residency, and the only way U.S. citizens can end this lifelong tax obligation currently is to formally renounce their citizenship, an expensive and time-consuming process – as the Sunday Express article points out.

"As a U.S. citizen living overseas, Meghan is still liable to pay tax in the United States until she fully renounces her American citizenship and becomes a British subject," the article says.

"But during the five years this will take, every penny spent, tiara loaned and household bill subsidised will be intensely scrutinised by the United States's strict Internal Revenue Service.

"The financial strain could cripple Harry's and the Royal Family's finances in Britain and virtually wipe out Meghan's US$5m U.S. fortune, aides fear.

"Even Prince Charles and the Queen's finances could face scrutiny under the U.S. tax rules, because they provide funding and support for the couple."

The article then quotes "an aide" as saying: "We're looking at a level of financial exposure the Royal Family has never had to face before. It's the royal household's worst nightmare."

The Sunday Express points out that not just Prince Harry's annual trust fund income – said here to be £300,000 – could be viewed, by the IRS, as liable for U.S. tax due to the fact of its now being "available" to his American wife, but that "stringent regulations on taxing benefits in kind means details of jewellery, designer outfits and cars on lease can [now] be demanded" by the U.S. authorities.

"Even their grace-and-favour home, Nottingham Cottage in Kensington Palace, will be looked at," the article says.

The Daily Mail, one of the U.K.'s largest-circulation newspapers, posted a similar story to that of the Sunday Express on its website today, which quickly attracted attention and by 9:30pm London time had been shared 4,400 times, and had been commented on by 2,700 readers.

David Treitel, managing director of London-based American Tax Returns Ltd, which specialises in helping American expatriates with their tax affairs, was among the first tax experts to point out the potential issues Prince Harry and his then-future wife would face once they were married. Last November, days after the engagement was announced, for example, he had already worked out how some of the gifts that she had received might need to be reported to the IRS, such as her engagement ring.

If, as likely, it were worth more than US$100,000, he explained at that time, she would be obliged to file an IRS Form 3520, formally known as the Annual Return To Report Transactions With Foreign Trusts and Receipt of Certain Foreign Gifts, and she would "in any event need to have the ring valued, as a gift, for IRS reporting purposes, and potentially could suffer a US$10,000 penalty if she fails to disclose it."

Today, Treitel said the Sunday Express article overlooked an element of the story that is relatively recent but extremely important as far as U.S. tax obligations go: the Duke and Duchess of Sussex's baby, due sometime in the spring, possibly in April.

Noting that the Duchess is "unlikely to renounce before the baby arrives," Treitel said the "sweet little prince or princess will, it therefore seems, automatically be a U.S. citizen from birth."

"The infant, who we are told will be seventh in line for the throne, will also become subject to U.S. tax and reporting from the moment it is born," he added.

The royal offspring could, though, be one of the first beneficiaries of new legislation U.S. President Donald Trump has said he plans to propose that would make it more difficult for babies to automatically become American citizens.

As reported, Trump told a television interviewer last month that he wanted to put an end to so-called "birthright citizenship", whereby babies born in the U.S. to non-American parents automatically become American citizens, but his comments were seen as likely to affect the automatic citizenship of babies born to American parents abroad, when one of the parents isn't American, as in the case of the Duke and Duchess of Sussex.

Trump's comments were welcomed by many accidental Americans and groups that represent them, because such "accidentals" typically struggle with the life-long tax burden their American citizenship conferred on them, even if they have lived most of their lives in another country.

Those in the business of looking after American citizens outside of the U.S., particularly those based in the U.K., are likely to be watching with interest to see which firm the Royal Family chooses to help it in the matter of the Duchess of Sussex's tax obligations.

As Royal Family watchers are quick to point out, Meghan Markle wasn't the first American to marry into the British royal family. And it's generally thought that Wallis Simpson, the American divorcee who married King Edward VIII in 1937, kept her American citizenship.

She was able to, experts say, because back then, the U.S. wasn't as aggressive about coming after those of its citizens who married foreigners and moved overseas, with no intention of ever returning, for tax.

As reported, the American Citizens Abroad and other groups representing American expats and accidental Americans have been ramping up their efforts recently to convince U.S. lawmakers to replace the U.S.'s current citizenship-based tax (CBT) regime with a regime that would be based on the individual's place of residence (RBT), as is the norm in most of the rest of the world. If this were done, the Duchess of Sussex might not have to renounce her citizenship to avoid having the IRS expecting to be able to investigate her and her husband's financial affairs, or those of their unborn child and any future children.