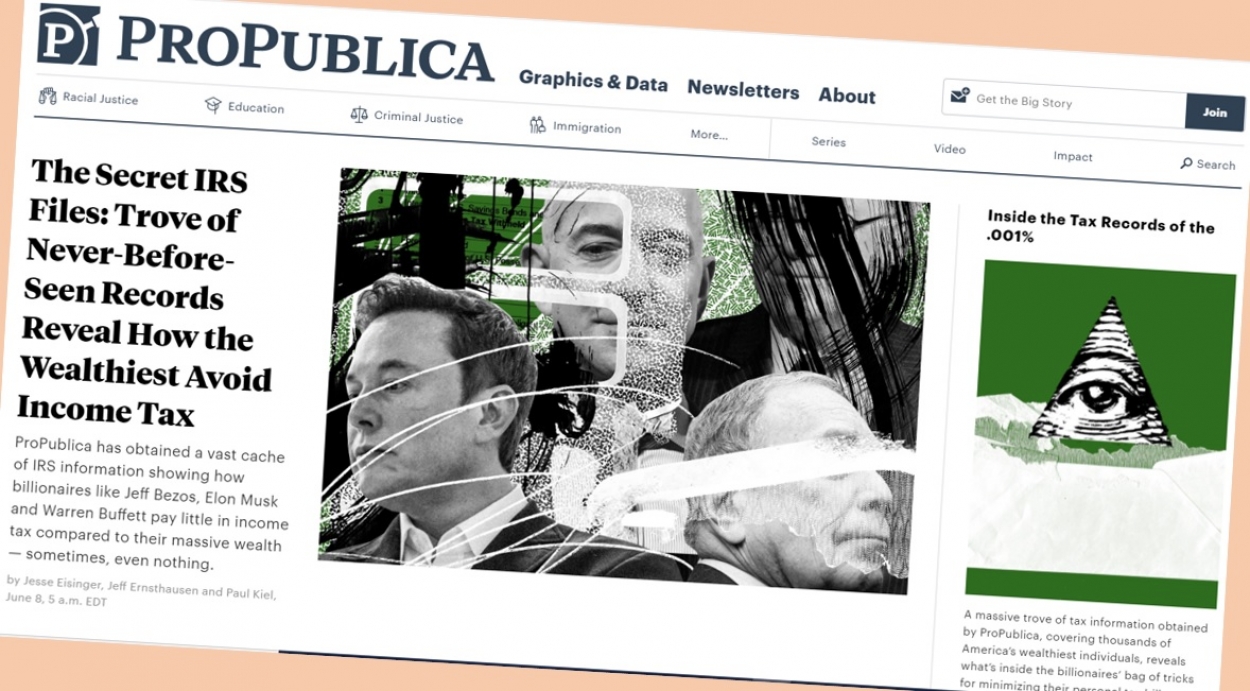 The ProPublica website, showing its exposé into how America's 'wealthiest avoid income taxes

A major analysis of IRS documents by ProPublica – a New York-based, non-profit investigative journalism organization – has shown how some of America's wealthiest and best-known citizens managed to avoid paying almost any federal income taxes between 2014 and 2018.

Tax experts said the findings are certain to add to the already-considerable pressure U.S. lawmakers are feeling to ramp up financial information reporting obligations, particularly those that involve non-U.S. banks and other financial services entities – which in turn is expected to make banking and investing even harder than it already is for American expats.

The lengthy ProPublica report shows how America's wealthiest individuals manage to take advantage of loopholes in the U.S. tax code, by keeping their annual "income" to a minimum, holding their wealth instead in the form of homes, yachts, shares in companies that they run and so on. This wealth only becomes potentially taxable at the point when these assets are sold, if a gain is realized, and even then, there are tax loopholes to be taken advantage of to reduce or even eliminate income which could be taxed.

Among those reacting to the ProPublica findings was the New York Times, where Binyamin Appelbaum, a member of the paper's editorial board, declared in an opinion piece headed "The Real Tax Scandal Is What's Legal" that the money wealthy Americans can potentially save "by cheating on their federal income taxes" is "nothing compared with how much money they've been saving by following the rules."

Massachusetts Senator Elizabeth Warren, who has spoken in the past about the "need" for a "wealth tax," reiterated this view in interviews with major U.S. media organizations after the ProPublica report was published. On Twitter, she said: "Our tax system is rigged for billionaires who don't make their fortunes through income, like working families do. The evidence is abundantly clear: it is time for a #WealthTax in America to make the ultra-rich finally pay their fair share."

ProPublica doesn't say how it obtained what it calls "the confidental tax records"of the 25 richest Americans" on which it bases its report, beyond saying that the data had been given to it "in raw form, with no conditions or conclusions." After receiving it, ProPublica journalists then spent months processing and analyzing it to transform it into a useable database, it says.

The IRS data was then compared to "how much Forbes [the American magazine known for its annual "Rich List"] estimated their wealth grew in that same time period."

"The results are stark," the ProPublica report continues.

"According to Forbes, those 25 [richest American] people saw their worth rise a collective US$401 billion from 2014 to 2018. They paid a total of US$13.6 billion in federal income taxes in those five years, the IRS data shows. That's a staggering sum, but it amounts to a true tax rate of only 3.4%."

Much of the ProPublica report focuses on the wealth of four U.S. billionaires – Jeff Bezos, Elon Musk, Michael Bloomberg and Warren Buffett – and how the income taxes they are shown by the IRS data to have paid in the tax years running from 2014 through 2018 compares with what their actual "wealth growth" is seen to have been.

All the wealthy individuals whose tax information is described in the ProPublica report were, it says, asked to comment, with all those who responded, "including Buffett, Bloomberg and [Carl] Icahn," saying that they had "paid the taxes they owed." A spokesperson for George Soros explained that he had "lost money on his investments [between 2016 and 2018, and] therefore did not owe federal income taxes in those years," while Bezos and Musk didn't reply.

ProPublica said that in addition to publishing what it has thus far, it intends to further use the IRS data it's obtained "to explore in detail, in the coming months, how the ultra-wealthy avoid taxes, exploit loopholes and escape scrutiny from federal auditors."

Tax experts said the ProPublica report, coming at a time when the Biden administration is in the process of formulating its plans for closing the so-called "tax gap" and rebuilding a U.S. economy that's been badly hit by the still-ongoing Covid-19 pandemic, will inevitably reinforce calls for greater scrutiny of financial transactions, and increasing taxes.

"It's no coincidence that the Biden administration's American Families Plan proposal calls for additional funding for the IRS, part of which will be allocated to enhancing the bureau's enforcement of international tax information reporting.

"This implies that the IRS continues to believe that Americans with income and financial accounts abroad are likely tax dodgers, despite the vast majority of the 9 million Americans estimated to currently be living overseas having been proven – again and again – to be ordinary, middle class people."

Then there's the U.S. system of citizenship-based taxation (CBT), noted Toronto-based lawyer John Richardson, who specializes in citizenship and tax issues, and who is a founding member of a recently-launched organization called SEAT (Stop Extraterritorial American Taxation).
"Because of CBT, the U.S. exports its tax system to individuals living in other countries," he added.

"And by demonizing the rich, the ProPublica article will provide support for two major changes in the tax regime that will severely affect U.S. expats.

"First, investment income – for example, capital gains – will no longer be taxed at lower rates than other forms of income.

"Second, tax will no longer be limited to the taxpayer's yearly income amount, but will be expanded to tax their actual wealth, as has been detailed in the Biden administration's proposals for a 'wealth tax'.

"This would be supported by a beefed-up reporting regime, which would leverage FATCA and other information reporting measures, in order to ensure that Americans  identify and report almost everything they own, whether at home or abroad."

Keith Poniewaz, director of international advisory services for Walkner Condon Financial Advisors, Madison, Wisconsin, noted that one of the take-aways from the ProPublica research is that, given the way that the Tax Code is structured, recent crack-downs on offshore assets by the U.S. "might not have been as necessary as it seemed at the time that they were done."

The addition of a wealth tax to the expat mix, "which currently isn't covered by treaties, etc., could add complications to Americans abroad, depending on how it's written," he added. "Like the 3.8% surcharge on capital gains, as part of ObamaCare, can lead to double taxes.

"Similarily, we could see the elimination of the step up in basis on inherited assets. This could lead to additional complications for Americans abroad."

More in this category: « ACA to Treasury: 'de minimis rule' needed for GILTI and Transition Tax (and btw, RBT is needed too) Setback for FATCA reciprocity advocates in France, as Assembly fails to approve amendment »