In a statement issued on Sunday, the DATTF Steering Committee urged Democrats Abroad around the world to add their names to this resolution, while adding that it could not guarantee that the change would necessarily "become [official] Democrats Abroad policy at this time" – but that it was still worth a try.

"Sign your name in support of the resolution (deadline is this Wednesday) by clicking here," the DATTF statement added.

"The deadline to submit a resolution in order to change [Democrats Abroad] policy is this coming Thursday, April 21, and so steps we are taking are to meet this deadline." 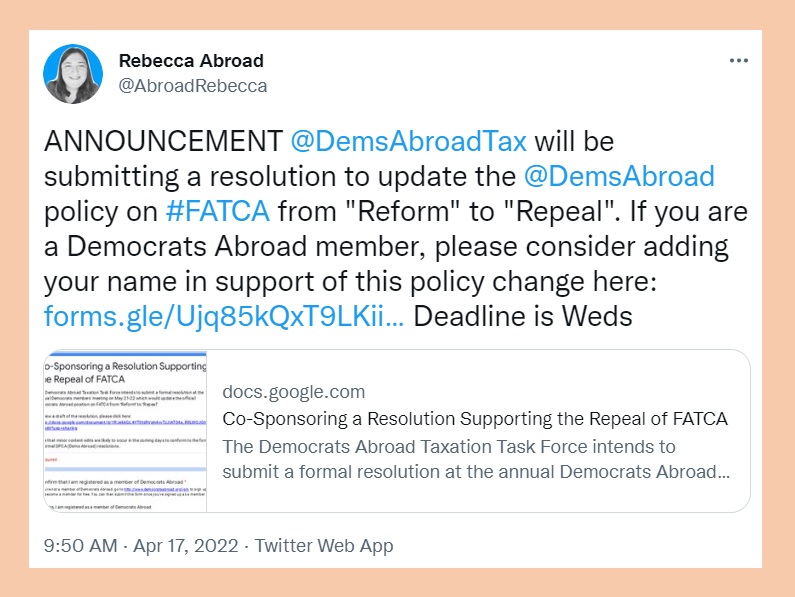 The resolution was flagged up on Twitter on Sunday morning by Taxation Tax Force head Rebecca Lammers (pictured left).

The DATTF Steering Committee's announcement, which may be viewed on the Democrats Abroad's website by clicking here, came in the wake of several major  developments emerging from Washington on the subject of FATCA, (Foreign Account Tax Compliance Act), which the statement alludes to.

It gives as the "main reasons" for deciding to go ahead with the resolution "at this time" as:

*  Information contained in a 37-page U.S. Treasury Inspector General for Tax Administration (TIGTA) report that emerged last Tuesday, which, the DATTF Steering Committee statement noted, revealed that “when [FATCA] was passed in March 2010, the Congressional Joint Committee on Taxation estimated that revenue from [it] would be US$8.7 billion from FYs 2010 to 2020.

"[However,] to date, the IRS has been unable to quantify revenue generated from FATCA compliance activity beyond the US$14 million in revenue from penalties unrelated to [certain IRS FATCA compliance] campaigns, despite spending over US$574 million on implementation and establishing two campaigns [aimed at boosting compliance]".

This data, the DATTF Steering Committee statement went on in its statement, "unequivocally and with no doubt demonstrates that FATCA has failed to perform the purpose it was intended for, which was to reduce tax evasion and money laundering."

* More than a decade's worth of "testimonials, surveys, and data" from DA members as well as other Americans abroad that "confirms the material harm that FATCA has caused – in the most extreme circumstances, reports of divorce from a non-U.S. spouse, and suicide."

"If the resolution is selected for the agenda at the global meeting, a certain amount of time will be allotted for debate, and a vote will take place. Only DPCA reps are able to vote at this meeting, but any DA member can attend and observe."

The so-called global meeting takes place once a year, at which the Democrats Abroad considers proposals to update its policy positions, which are said to carry a certain amount of  weight with the U.S. Democratic Party because the Democrats Abroad is the party's official overseas arm. This year's meeting is scheduled to take place on May 21 - 22.

Ahead of the 2020 elections, the Democrats Abroad were unsuccessful in managing to get any of their policy issues onto the full Democratic Party Platform, such as a call for replacing the U.S.'s current citizenship-based tax regime with one based on the taxpayer's country of residence, and a proposed change to the FATCA regulations that would "exempt law-abiding Americans abroad -- and their banks -- from FATCA and FBAR reporting" rquirements, on accounts held in their "bona fide country of residence", often referred to as the "Same Country Exemption" rule.

This failure by the main party to take any of the Democrats Abroad's policy positions onboard did, however, take place while Donald Trump was still in the White House, before the Democrats controlled both houses of Congress as they do now, and also before the FATCA-related developments mentioned above had taken place.

One potential issue, however, is that FATCA was introduced by Democrats, and signed into law by one (President Obama), and its repeal has been a feature of the Republican Party's platform for years.

Those interested in signing up to support the Democrats Abroad Taxation Tax Force's proposed resolution, calling for the repeal rather than reform of FATCA can begin to do so by clicking here. (Those who aren't yet members of the Democrats Abroad, which is necessary to add one's name to the petition, will find instructions here to do so.

The Democrats Abroad Taxation Task Force is also reminding expats that is counting on "all U.S. citizens living outside [the U.S.] to participate" in its latest survey of attitudes towards the way American expats are currently being taxed, for which the deadline is April 30.

As TTF chair Lammers told the AXFNJ, fresh data about expat American views on taxation and related issues is needed because "things have changed significantly in the last few years for Americans abroad, especially with the impact of the pandemic.

"We need updated research to share with Congress to raise awareness of the tax and financial access problems faced by Americans abroad.”

President Obama signed FATCA into law in a Rose Garden ceremony in 2010, when it lay buried inside (and thus largely un-noticed) a 361-page domestic jobs bill known as the HIRE ("Hiring Incentives to Restore Employment") Act.

As some  who remember the bill's progress through Congress at the time have pointed out subsequently, the element now referred to as FATCA had evolved out of a proposed free-standing piece of legislation known as the Stop Tax Haven Abuse Act of 2007, which had been seen as worth including in the HIRE Act because, advocates said, it would act as a "revenue offset" to the costs of implementing the HIRE Act, by bringing fresh tax dollars into the government's coffers, which it was expected to do by ensuring that U.S. taxpayers didn't use overseas financial institutions to hide their wealth.

It didn't come into force until 2014, however, and as the TIGTA report mentioned above suggests, it never raised anything like the "billions" of dollars of fresh tax revenue some had predicted that it would.

More in this category: « Dems Abroad Taxation Task Force webinar: 'Which tax strategy is best for me: FEIE or FTC?' TIGTA reports: an interim report on the 2022 filing season; and 'strategy needed' to grow electronic filing of biz returns »